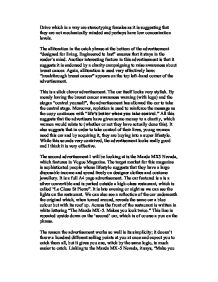 Drive which in a way are stereotyping females as it is suggesting that they are not mechanically minded and perhaps have low concentration levels. The alliteration in the catch phrase at the bottom of the advertisement "designed for living. Engineered to last" ensures that it stays in the reader's mind. Another interesting feature in this advertisement is that it suggests it is endorsed by a charity campaigning to raise awareness about breast cancer. Again, alliteration is used very effectively here: "breakthrough breast cancer" appears on the top left-hand corner of the advertisement. This is a slick clever advertisement. The car itself looks very stylish. By merely having the breast cancer awareness warning (with logo) and the slogan "control yourself", the advertisement has allowed the car to take the central stage. Moreover, repletion is used to reinforce the message as the copy continues with "life's better when you take control." All this suggests that the advertisers have given some money to a charity, which women would relate to (whether or not they have actually done this). ...read more.

The car is actually shown twice. Moreover, this also shows that the car comes in other colours and its versatility. The name the logo are in the bottom right-hand corner of the page. In the bottom of the page there is some small black hand printing on a white background. This gives the optional extras and the contact details. This part also tells us the price of the car, which is �15,995. At the bottom of the left-hand side 'Formula Woman' appears which suggests that this car offers the same experience as Formula-One, but it is for women. The third advertisement I have chosen is an advert for the new Mitsubishi outlander, this advert featured in the Daily Telegraph. The target audience for this paper is establishment figures, people who are in position of power, who work in business or the city, large farmers, conservative party supporters, believers in respectable values, old-fashioned virtues of hard work and courtesy. ...read more.

The Mazda advert is completely the opposite and is associated with freedom and being 'cool' rather than safety because young people are not very safety-conscious. However, the y should be because statistics show that most road deaths occur in this age group. I think Mazda MX-5 has managed to make their advertisements very eye-catching. When the eyes hook onto the image they are stuck there. This is because there is a sense of curiosity in the mind. The most important reason is because they have shown all the information they needed to, on a page. Moreover, the picture is a still life, which works exceedingly well as the reader is totally focussed on the product. This is very difficult to achieve, but Mazda had conquered it very cleverly. The most effective advertisement is the Mazda MX-5 because it is fun, impressive and perhaps I like it because its target audience is the closest to me. The least effective advertisement is the Ford Focus. I like the car but I don't like how it is presented because the dark background creates a sombre mood and it is dull. ...read more.