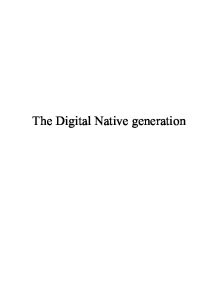 The Digital Native generation. The main themes of this report are how young people communicate and use digital media, how they approach issues of trust and security online and how they seek advice online.

The Digital Native generation Executive Summary The internet is a 'natural' space for young people. It is incorporated into their lives and they will use it to search for information as well as communicating and engaging with others. Young people can interact, keep their anonymity and can compare information sources. They are often referred to as Digital Natives where they have grown up with digital communications. They are said to living hybrid lives combining the physical and virtual world. Internet advice-seeking is seen to be more common. Introduction Young people are positioned between adolescence and adulthood. The younger people have adolescent support agencies while the older ones are part of the adult support process. The older ones reaching adulthood want to seek help and advice in a different way as they start to move into the workplace, are subject to social and environment changes and gaining new responsibilities. The Digital Native generation are referred to young people aged between 16 to 24. They are a group which has grown up with the internet and mobile phone and are different from previous generations. They have different expectations and needs in terms of how they engage, interact, seek information and entertain themselves. The internet is an important tool for young people's lives. ...read more.

This is because many drug-related activities are illegal and the internet is anonymous. Online help-sites are becoming more consistent now. Conclusion Young people have embraced digital media and have connected the physical world with the internet or virtual world. They can build physical relationships as well as build friendships with people whom they have never met. With the internet, they feel part of new groups and communities with similar interests so they can communicate and build social relations. Social networking has increased more communication and interaction with the use of transferring photos and joining in debates online. Stressful matters have different sources for information such as friends, professionals, parents and the internet. But issues like drugs, advice is found out from the internet because of anonymity. Young people want as many opinions as possible for help and advice so they can be sure to make the right decision. Recommendations An area for further study can be the report on 'Digital Lifestyles - Young people 16-24, Ofcom, 2009.' The need and demand for advice from the internet needs to be more critical so young people can work through problems or situations with the help of peer support and can also gain professional advice. When young people seek advice online, they should be able to participate more. Reference List Hulme, M. YouthNet's Life Support: Young people's needs in a digital age. ...read more.