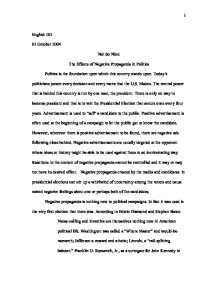 The Effects of Negative Propaganda in Politics

English 101 01 October 2004 Not So Nice: The Effects of Negative Propaganda in Politics Politics is the foundation upon which this country stands upon. Today's politicians power every decision and every move that the U.S. Makes. The central power that is behind this country is run by one man, the president. There is only on way to become president and that is to win the Presidential Election that occurs once every four years. Advertisement is used to "sell" a candidate to the public. Positive advertisement is often used at the beginning of a campaign to let the public get to know the candidate. However, wherever there is positive advertisement to be found, there are negative ads following close behind. Negative advertisements are usually targeted at the opponent whose ideas or history might be able to be used against them in an incriminating way. Reactions to the content of negative propaganda cannot be controlled and it may or may not have its desired effect. Negative propaganda created by the media and candidates in presidential elections can stir up a whirlwind of uncertainty among the voters and cause mixed negative feelings about one or perhaps both of the candidates. Negative propaganda is nothing new to political campaigns. In fact it was used in the very first election that there was. According to Edwin Diamond and Stephen Bates: Name-calling and invective are themselves nothing new in American political life. ...read more.

Aldous Huxley would describe a persons reaction when put into a large crowd as the following: "In a word, a man in a crowd behaves as though he has swallowed a large dose of some powerful intoxicant. He is a victim of what I have called "herd-poisoning" (223). When the crowd is over taken with "herd-poisoning", a great leader can take advantage of that group's mental weakness and in a way control them. Hitler himself said, "To be a leader means to be able to move the masses" (qtd. In Huxley 222) While the presidential candidates may not be using "herd-poisoning" to manipulate the public into a mindless army, they are never the less using manipulation to persuade the public the see that all logic points to that candidate getting elected. This tactic is especially useful when trying to spread a negative statement about the opponent. Public speeches are used to take advantage of "herd-poisoning" to get the crowd on their side, and at the same time put the crowd on offense against the other opponent. Television is also a major source of presidential advertisements. Commercials run daily for both candidates. Some of these commercials are positive targeting a particular group of people as their audience. While others are negative targeting ones opponent. These ads that are seen have been carefully planned out and have gone through a test run on a focus group. For example, Bush's "Reelection Team Says Democrat's 32-year Career Is Rich in Ammunition" (Kurtz). ...read more.