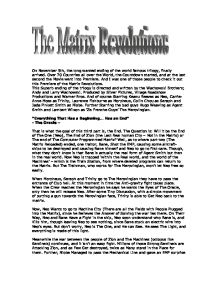 On November 5th, the long wanted ending of the world famous trilogy, finally arrived. Over 70 Countries all over the World, the Countdown started, and at the last second the Movie went into Premiere. And I was one of those people to check it out this Premiere of the Matrix Revolutions. This Superb ending of the trilogy is directed and written by the Wachowski Brothers; Andy and Larry Wachowski. Produced by Silver Pictures, Village Roadshow Productions and Warner Bros. And of course Starring Keanu Reeves as Neo, Carrie-Anne Moss as Trinity, Laurence Fishburne as Morpheus, Collin Chou as Seraph and Jada Pinkett Smith as Niobe. Further Starring the bad guys Hugo Weaving as Agent Smith and Lambert Wilson as 'Ze Frenche Guye' The Merovingian. "Everything That Has a Beginning... Has an End" - The Oracle - That is what the goal of this third part is, the End. The Question is: Will it be the End of The One (Neo), The End of Zion (the Last Real human City - Not in the Matrix) or The end of The Computer Programmed Matrix? ...read more.

Neo is The One. The trilogy of the Matrix builds it up. In Part one, the One was Born, In Reloaded The One lived, then finally in part three he is supposed to die. And that is what happens. Neo is a simple character, He doesn't speak much. His Movements are thoughts are therefore totally unexpected. This point is supported by the fact that the whole story of the matrix is very unexpected too. I can't find myself in Neo. For Example, He is far more intelligent and calm than me. Oh... and he can fly =)!! Agent Smith has a bit more smaller role. He is The bad guy. But still, I find him sympathetic too, because his character is displayed very strong throughout all the three movies. He really wants to destroy everything; his hate to Neo is depicted so strong, even the whole surrounding acts to his emotions. The Whole Movie is shown in several places. It Started off in the Real World, Then on The Train station, Club Hell, Zion, Logos, Machine City, Matrix Super Brawl and then the real world without any matrix. ...read more.

Not only because it contains no Bullet time, the Story is far too weak. It has No strength. In the Algemeen Dagblad I even read one said the people who worked to create this movie didn't work hard enough; The result is really poor. I totally disagree, because first of all, this movie DOES contain Bullet Time, only it is the form of the Advanced CG effects, with even a better result than bullet time. Furthermore, about the story line, I find the story a little less complicated than the previous ones, but that doesn't mean the story is Weak! In a way it is even better, because now I don't need to spend several sleepless nights thinking about what was going on in the Movies. Then my Final disagreement, The People who worked on the matrix did a BIG effort, to get the movies like this. The money and Time spent on this movie is enormous, and broke all records in Hollywood's movies! So how can the result be poor? Oh well, some people will simply never understand the Meaning of The Matrix, the efforts, Idea's and Results. Anyway from my side, The Matrix will be always something I will remember for ever, It Truly is a Winner to me. ...read more.