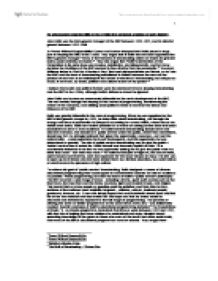 To what extent was the BBC in the 1920s the personal creation of John Reith?

To what extent was the BBC in the 1920s the personal creation of John Reith? John Reith was the first general manager of the BBC between 1922-1927, and its director general between 1927-1938. In 'Power Without Responsibility' Curran and Seaton interpret that Reith played a large part in shaping the BBC in the 1920s. They argue that if Reith had not been appointed the BBC's general manager "many of the features of broadcasting which are taken for granted today would certainly be absent."1 They also argue that "Reith's domination of the Corporation in its early days was massive, totalitarian, and idiosyncratic, and for many decades the traditions of the BBC seemed to flow directly from his personality."2 However, Williams states in "Get Me A Murder A Day" that such interpretations are flawed, as to "see the BBC and the form of broadcasting established in Britain between the wars as the product of one man is to misinterpret the nature of the times. Broadcasting was shaped as much, if not more, by social, political and cultural factors of the period."3 I believe that social and political factors were the dominant force in shaping broadcasting and the BBC in the 1920s, although Reith's influence cannot be ignored. John Reith can be seen as enormously influential on the early development of the BBC. This was mainly through his shaping of the course of programming, transforming the nature of the company, and utilising socio-political events to increase the status and influence of the BBC. ...read more.

The trade unions reacted by calling a general strike for ten days in May which paralysed the county's essential resources. As "the government saw the strike not simply as an industrial dispute, but as a political and constitutional threat,"6 it imposed restrictions about how it could be reported. The BBC faced a dilemma, it could not report any information favouring the strikers or that would encourage the strikes to spread, as the government would intervene, but it could not be seen as too pro-government, or the BBC would lose its credibility among the many which supported it and the strikers may have closed it down. Reith came up with a solution to accommodate both sides: adopting a neutral stance. In its broadcasts, the BBC explained what was happening and what the citizen could do, but not why the strike had came about. "The tone in which the strike was reported was cheerful and conciliatory throughout."7 This stance taken by Reith was enormously effective, and greatly enhanced the status of the BBC, and by the end of the strike, millions had come to depend on the accuracy of the BBC's information. As Williams states in "Get Me A Murder A Day:" "For Reith, the General Strike in particular was a chance to prove to the government that it could be trusted to report controversial matters, as well as maintain a commitment to impartial reporting."8 By 1927, the government recognised in principle the BBC's right to broadcast its own news. ...read more.

of the market and direct state control corresponded to the 'turn and temper' of the age."12 The First World War had laid the foundations for acceptance of a public corporation. Insurance, the coal industry and food rationing had been organised and operated centrally as part of measures imposed to fight the war. The widespread concern around the country about the inefficiency of the free market in the distribution of resources meant that Reith's ideas for the BBC to act as a "public service" were more easily adopted. Thus, if the social-political climate had not been correct, Reith's may not have succeeded in transforming the BBC as a "public service." The BBC in the 1920s can also be viewed not as John Reith's personal creation as he was accountable to others. It was the Postmaster General, who through an act of 1904 was given control over wireless telegraphy and telephony, had the final say over the company. In conclusion, it is apparent that a variety of factors shaped the early development of the BBC in the 1920s. Although Reith was very influential on the BBC, namely through shaping its course of programming and its function according to his own values, and through guiding it through a major crisis, to enhance its status and credibility, the BBC cannot be seen as his personal creation. This is because there were a number of social and political factors which also shaped the BBC, and in some cases, combined with Reith's ideas to help them work, or provided Reith with the opportunity to exploit them to aid the corporation's development. ...read more.