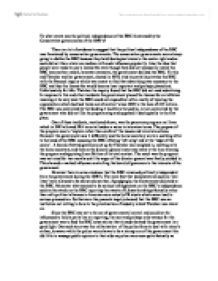 To what extent was the political independence of the BBC threatened by the Conservative governments of the 1980's?

To what extent was the political independence of the BBC threatened by the Conservative governments of the 1980's? There is a lot of evidence to suggest that the political independence of the BBC was threatened by conservative governments. The conservative governments were always going to dislike the BBC because they hold ideological views to the center-right and as such did not like a state run medium with such influence popularity. Also the idea that people were made to pay a license fee even though they did not necessarily watch the BBC was another reason, however ostensive, the government disliked the BBC. To this end Thatcher and her government, elected in 1979, tried to partially privatise the BBC with the Peacock inquiry which was meant to find that advertising was necessary to the BBC and thus the license fee would become less important and perhaps phased out. Unfortunately for Mrs. ...read more.

However the government saw it differently and the home secretary wrote a scathing letter to the head of the BBC accusing the BBC of being 'left wing' and at the 'edge of the union'. A board of vetted governors set up by Thatcher also weighed in, meeting with the home secretary, and then as the director general away was away at the time viewing the program and apprising Leon Britton of its total content. The result was the program was not aired for two months until the anger of the director general was finally yielded to. This showed a marked influence controlling the board of governors to the interests of the government. However there is some evidence that the BBC remained politically independent from the government during the 1980's. The mere fact that documentaries such as 'real lives' were allowed to be shown shows that, if grudgingly, the Government did yield to the BBC. ...read more.

In essence this 'finished up angering both sides'. In conclusion while the BBC certainly had its political independence threatened by governments of the 1980's, this suppression rarely lasted long, caused out cry and was resurgent. The latter alone means one could say the BBC's political independence was not truly threatened because people at the core of the BBC such as Milne continued to affront this suppression. However, symbolic of the fall of this opposition was the true loss to the independence of the organization the loss of Milne in 1987, 'the last true director general of the BBC', then board members and the new director general gained more confidence in their actions at the very end of the 1980's. This is Marxist as the dominant conservative ideology, traditionally held by elites as well, influenced working class people through the new conservative BBC eventually. ...read more.