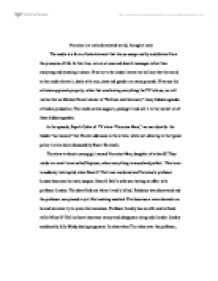 Veronica in a male dominated world, through a male The media is a form of entertainment that lets us escape reality and distract from the pressures of life. In this time, we are at ease and absorb messages rather than analyzing and breaking it down. If we try to be media literate we will see that the world as the media shows it, deals with race, class and gender on many grounds. If we use the criticism approach properly, rather that swallowing everything the TV tells us, we will realize that as Michael Parenti shows in "Political entertainment," many hidden agendas of media production. The media serves support, package it and sell it in the market all of these hidden agendas. In the episode, Papa's Cabin of TV show "Veronica Mars," we can identify the hidden "curriculum" that Parenti addresses in the article, while not adhering to the typical police / crime show discussed by Stuart Kaminski. The show is about a young girl named Veronica Mars, daughter of a sheriff. They reside in a small town called Neptune, where everything is sound and perfect. This town is suddenly interrupted when Dean O ' Dell was murdered and Veronica's professor Landry becomes the main suspect. ...read more.

Therefore, the son is a teenager who is easily convinced into giving his address over the phone when Veronica acts like radio show and lures him with an ipod. When she goes there he answers the door with a video game in his hand, not very intellectual compared to Veronica. This is because Veronica's father, who holds a better position in society as a sheriff, is a man and is stable financially. While the stripper, because she is a women struggles more financially to raise her son. This shows that the message of the episode is that men are represented as having the upper hand in positions in society and mentality to raise a child, unlike women. Veronica mars shows how a women use their sexuality whether it is to solve a crime or get paid. The hero of the show is this extraordinarily smart, college freshman girl who solves the crime despite of being in male dominated profession. Although she has the brains and capacity to solve the crime, she uses her sexuality to get access to information or out of trouble. There is a scene where veronica steals the criminals file from the cabinet which is against the law. When her father reprimands mans her, she smiles and gives him "puppy eyes" and gets away with it. ...read more.

The reason behind the fact that the episode sets in a college rather than say, high school is for several factors. First in a high school environment the people that surround and influence a person, are other immature teens that wouldn't have the drive Veronica mars has. Also if you are in high schools, assuming you are under eighteen, by law and because of your parents you would not be able to go to places and have access as an adult could. Like go to 21 and over club to investigate someone or a crime scene. Also, any other age, race would change the demographic it is attracting. Veronica Mars portrays the stereotypical American blond girl. Although she faces the pressure of a teenage girl like sex, boyfriends and parents she rises above it to save the day, of course with the help of her daddy and sexuality. This show may seem to to portray a powerful woman taking the role of a man and proves that she is better than her father, the sheriff. In actuality it promotes the stereotype that a woman in any profession is given that title through the use of her sexuality and her male counterpart. It is important when watching the media and pop culture that we read between the scripts and grasp the true message it is conveying to the public. ...read more.