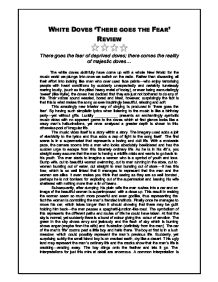 There goes the fear of deprived doves; there comes the reality of majestic doves…

The white doves slothfully have come up with a whole New World for the music world we plunge into once we switch on the radio. Rather than discarding all their effort into looking like men who over used face paints⎯who enjoy terrorising people with heart conditions by suddenly unexpectedly and certainly tunelessly roaring loudly, (such as the pitied heavy metal of today), or even being excruciatingly ‘sweet’ (like Kylie), the doves has decided that they are just not bothered to do any of this. Their voices sound wearied, bored and irked, however, surprisingly the fact is that this is what makes the song so awe inspiringly beautiful, relaxing and soft.

This amazingly new interior way of singing is produced in ‘there goes the fear’. By having such simplistic lyrics when listening to the music is like a birthday party⎯yet without gifts. Luckily ___________ presents an enchantingly symbolic music video with no apparent genre to the doves which at first glance looks like a crazy man’s hallucinations, yet once analysed a greater depth is shown to this otherwise pool of irregular life.

The music video itself is a story within a story. The imagery used adds a jolt of electricity to the lyrics and thus adds a zap of light to the song itself. The first scene is in a supermarket that represents a boring and dull life. With a moderate pace, the camera zooms into a man who looks absolutely bewildered and has the sudden urge to escape from this bizarrely ordinary life. As he is in his 40’s, you straight away assume that the man is having a midlife crisis and wants to go back to his youth. The man starts to imagine a woman who is a symbol of youth and love. Dump wife, cut to beautiful woman swimming, cut to man running in the store, cut to woman bursting out of water, cut straight to man bursting out of store⎯it has this flow, which is so well linked that it manages to represent that the man and the woman are alike. It even makes you think that seeing as they are so well bonded, perhaps he is not bonkers for exploding out of the supermarket and leaving his wife shattered with nothing more than a tin of beans.

Subsequently, after dumping his plain wife the man rushes into a car and an image of the beautiful woman is superimposed with a close up. This result in making the woman seem so much more powerful and even godlike, thus representing the fact the woman is controlling the man’s frenzied instincts. Finally once he manages to move his car, which takes longer than it should showing that there may be guilt holding him back⎯the man passes a spaghetti-junction-like road. The symbolism of this represents the different paths and routes of life he could have taken. At first the sky is normal, yet suddenly there is a burst of colour giving the odour of emotion. The green in the sky shows envy and jealously and the flash of sky which is burning shows anger (maybe from the wife) and frustration (definitely from the man). The car of the man’s ‘life’ zooms past a little boy and halts there. The boy at first is in a lush meadow, which could possibly represent the man’s previous life. Suddenly, yet surprising subtly the small blond boy is on cracked earth, dry like a desert. This ugly land may represent the man’s ordinary life and the cracks show that the man’s life is cracking⎯eroding away. The boy clings onto the feather and lets it go. The interpretations for just this minuet detail are enormous. A common interpretation is that the boy is dropping the fear, as at this point Jeeze Williamsappears to be straining his voice by saying ‘let it go’. However, being that a feather is a peaceful symbol the fear being represented by this is minimal. Instead, a more accurate interpretation is that the boy is letting go of peace as the feather may be of a dove. This would make more sense, as the boy finds no peace in his latter life, as he becomes this man who is escaping. The boy too escapes and the relationship of him and the man is proven to be that they are the same person is nearly proven once the scene is super imposed and is tracking as they both have the same reactions, which also gives a dreamy hazy effect. Afterwards the man is at a train station. Beneath the ‘normal’ looking train station is a hidden layer of symbolism. Firstly a billboard showing destinations is seen. For a spilt second the board flashes going forward. This confirms that the events that has and will happen in this extravagant music video is all in the man’s head as even the most ‘normal’ looking place is not normal. The clock is zoomed into, showing that time is going by and once again the man is off travelling to ‘freedom’. The man carefully sits down on the train and sees many unexpected passengers by him. The first is an old woman who smiles at the man. Her innocent glare says it all⎯’you’re one of us now’, ‘you can’t escape age’ or ‘go and find yourself a coffin because you’ll need one soon.’ The next unwelcome guest is a classic 80’s vicar. The vicar’s harmless grin is tainted with messages⎯’what about your vows and wife?’ Perhaps this is why the man does not smile back. Following more visions of the beautiful woman, the man passes the bridge of no return and a new life. You see the statue in Rio, which shows religion and an eager for love. Naturally the train does stop and unrealistically it stops in the middle of a carnival. Amazing, people are actually celebrating this mans freedom, or is he just imagining it again?

The thing is about this music video is that it is a twist between reality and fantasy. (Naturally you would not find a sky on fire when you’re walking in the park). The spicy element of reality topped with snips of dreams has been sizzled into a roll of a music video served to you by the majestic doves. Once analysed the video is digested in your mind and unless bashed with a hammer, it will not come out. On the other hand, that is once you analyse the video. The majority of viewers will not be stopping the video every three seconds in order to jot down the spectacular imagery. The majority of viewers will most likely watch the video and notice weird flashing pictures and flip the channel. Even those who will pause the music video in order to understand it will not succeed unless they do so several times. Nevertheless, for those will evaluate the video will have a breathtaking experience in which they will want to emphasise with others by explaining to them the beauty of this masterpiece. Consequently the meaning of the music video will be clearer. Another important point is that the video does not advertise the music in this dog eat dog world. Although the lyrics can be interpreted in various ways, the music video for it should have been a story about a break up as that is the most obvious theme that lashes out to you from the lyrics. However, the fact that the lyrics and music video shows different stories makes the audience think more about different themes and this makes the video stand out.

Overall, the White Doves there goes the fear song has unmistakable class and a sensational use of imagery. However, it is quite pointless, as no one will understand it as no one will quite frankly sit down with a notebook in his or her hands and try to evaluate a music video. Nevertheless for those who will or will understand even a minuet quantity of the video will experience breath taking cinematography and imagery used to represent a story, which to some will not even match the song lyrics. The lyrics are sung in not a bursting-with-enthusiasm-sweet-Kylie or a crazy Goth style but in a simply I’m-not-bothered vocal tone. This makes the music video more attention grabbing, as it seems more exciting. Nevertheless the video may be fantastic, yet it does not match the White Doves. Hey _____________ just who were you trying to advertise, the White Doves or your cinematography skills?