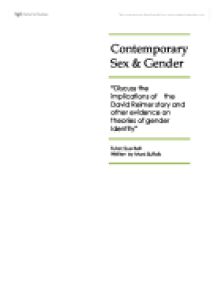 Contemporary Sex & Gender "Discuss the implications of the David Reimer story and other evidence on theories of gender Identity" Tutor: Sue Ball Written by Mark Suffolk Gender identity is an inner sense of being male or female and is usually congruent with biological sex. Sex is whether a child is biologically male or female, whilst gender refers to behaviours which are associated to being one sex or the other. What makes us feel female or male? Where does this feeling come from? There are different theories of what gives us our gender Identity. One of these is Social constructionism which considers humans learn our gender identity from the moment we are born. "Gender role learning is the outcome of accumulating learning experiences that the individual has in a particular environment" (Perry & Bussey, 1984) From the moment a family member becomes pregnant we are obsessed with whether the baby will be a boy or a girl. When the baby is born expectations are placed on the child to behave in a masculine or feminine way to meet cultural norms. Males are expected to be strong and in charge whilst females are expected to be caring and homemakers. ...read more.

The sex chromosomes determine whether a person is born male or female. Males have one X and one Y chromosome and females 2 X's. Not all humans have this chromosome pattern. Klinefelters syndrome is something that affects one in 500-1000 males. They have an extra chromosome and are 47 XXY. As these males have an extra X chromosome some of the male development is suppressed, also this can lead to a feminine looking male. Another unusual chromosome pattern is known as Turner Syndrome. This is found in approximately 1 in every 25,000 females. One of the sex chromosomes is missing so they are 45X. Females with this pattern have no periods and are sterile. Males and females are designed differently and each has a different hormone package. Androgens and estrogens are present in males and females. However males produce a lot more androgens than females, and females produce a lot more estrogens than males. The difference in the amount of these hormones produced accounts for many differences between males and females in physical appearance and emotions. Social learning theory doesn't take into account transsexuals. Transsexuals have a desire to live and be identified as a member of the opposite sex to the sex they were assigned at birth. ...read more.

He would try and persuade her to have surgery and take hormones in an attempt to have a false vagina fitted and develop breasts. Finally at the age of 13 after years of trauma Brenda's parents told her and the twin brother the truth. Rather than be angry at her parents Brenda was relieved that she had an explanation to her childhood problems. Straight away she changed herself back into a boy and changed her name to David. David took hormones to increase the male hormone testosterone, as his own production was low due to being castrated when younger. David tried to get on with his life and he paid for a new penis to be constructed. Sadly David encountered personal problems throughout his life and he tragically committed suicide aged 38. Gender identity is a complex subject. There are conditions that are biologically understandable, whilst being statistically uncommon. It is unclear in these cases how much of a person's inner belief of gender is psychological and how much is biological. We now live in an ever changing world where the stereotypical roles of males and females have changed. However in humans we cannot ignore the powerful hormone package and genes given to us when we are born with regard to our inner sense of gender identity. ?? ?? ?? ?? Mark Suffolk Sex & Gender Group A 6 | Page ...read more.