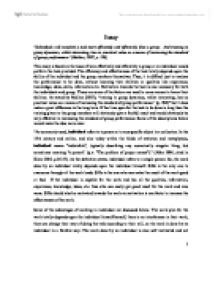 Generally, there are two types of group i.e., formal and informal group. Formal groups are created for the accomplishment of the specific goal of the task. Here, the group structures are clearly defined, the tasks performed are clearly delineated and the group has the specific purpose for its formation. This kind of group lasts throughout the work period and has the same members. Informal groups are created from the social interaction of the group members themselves. It arises to satisfy the needs of its individual members. It does not have clearly defined structures. This kind of group only lasts for short time and its members may vary at each time. So, formal groups are created for the specific purpose whereas the informal group is created to fulfill the social needs of the group members. Working in groups may lead to better decision as the decision is made through the discussion among the group members. All the experience, knowledge, ideas, skills, information, etc are gathered from the group members and a conclusion is drawn from them which are obvious to provide with a good outcome which will lessen the chances of error in the work. These are some of the advantages of working in a group; on the other hand, there is a chance of conflict among the group members which may arise due to misunderstanding among the members. These kinds of conflicts may lead to the deformation of the group and the goal to be achieved may be in vain. ...read more.