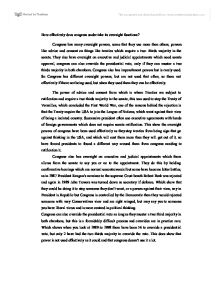 How effectively does congress under take its oversight functions?

How effectively does congress under take its oversight functions? Congress has many oversight powers, some that they use more then others, powers like advice and consent on things like treaties which require a two- thirds majority in the senate. They also have oversight on executive and judicial appointments which need senate approval, congress can also override the presidential veto, only if they can muster a two thirds majority in both chambers. Congress also has impeachment powers but is rarely used. So Congress has different oversight powers, but are not used that often, so there not effectively if there not being used, but when they used them they can be effectively. ...read more.

Congress also has oversight on executive and judicial appointments which them allows from the senate to say yes or no to the appointment. They do this by holding confirmative hearings which are normal uncontroversial but some have become bitter battles, as in 1987 President Reagan's nominee to the supreme Court bench Robert Bork was rejected and again in 1989 John Towers was turned down as secretary if defence. Which show that they could be doing it to stop someone they don't want, or a person against their view, say in President is Republic but Congress is controlled by the Democratic then they would rejected someone with very Conservatives view and are right winged, but may say yes to someone you have liberal views and is more centred in political thinking. ...read more.

have been impeached and were both acquitted at the conclusion of their trails before the senate, there was also former president Richard Nixon after Watergate would have been impeached and face criminal charges, but resign before the trail took place and was pardon but his successor, Gerald Ford. So congress does use it powers of oversight effectively but are rare in use like impeachment and the overriding a veto because it is hard to do so they don't use their powers and that it also that the president has found other ways around so the powers of congress are not used or are not be able to be used so are not used effectively but when they are they are used effectively. ...read more.