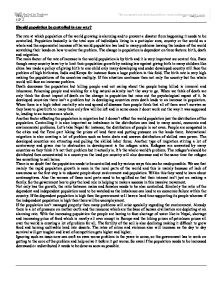 should population be controlled in anyway?

Should population be controlled in any way? The rate at which population of the world growing is alarming and to prevent a disaster from happening it needs to be controlled. Population basically is the total sum of individuals living in a particular area, country or the world as a whole and the exponential increase of the world population has lead to many problems leaving the leaders of the world scratching their heads on how to solve the problem. The change in population is dependent on three factors: birth, death and migration. The main factor of the rate of increase in the world population is by birth and it is very important we control this. Even though many country have try to limit their population growth by making law against giving birth to many children like china has made a policy of giving birth to one child only many developing and under developed country still face the problem of high birthrates. ...read more.

Controlling it is also important as imbalance in the distribution can lead to many social, economic and environmental problems. Let's take Nepal for instance; the distribution of people is not even. People are congested in the cities and the Terai part hiking the prices of land there and putting pressure on the lands there. International migration is also creating a lot of problem such as brain drain and uneven distribution of skilled man power. The developed countries are attracting and pulling the skilled labor force. Another type of migration stirring a lot of controversy and given rise to obstruction in development is the refugee crisis. Refugees are unwanted by many countries as they think it's not their problem but it actually is. It's the whole world's problem. The refugee's should be distributed then concentrated in a country as the load per country will also decrease and at the same time the refugee has something to call home. There is no doubt that the population needs to be controlled and by various ways this can be made possible. ...read more.

Already there is a lot of pressure on mother earth and the resource which are the base of human civilization are depleting at an alarming rate. With the increasing population the people are having to face shortage of water like in Nepal, shortage and increasing price of food which is mostly all over except in Europe and the hiking prices of petroleum prices all over the world is creating a lot of problem for all. The fertility of the soil is also declining making it difficult to grow food and turning cultivable land into deserts. The rates of crime and violence also will increase as the day to day survival will get tougher and level of competition gets higher and higher. Ignoring such an issue now can craft an even worse problem in the years to come, so the government has to work on getting to the core of the problem and help solve it before it get worse. So even if the population needs to be increased decreased or redistributed it needs to be done as soon as possible. ?? ?? ?? ?? Pragyan Shrestha 10th may,2008 GP 2 ...read more.