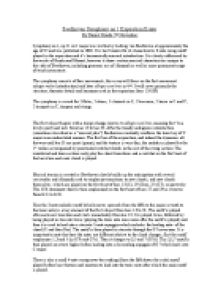 ﻿Beethoven Symphony no.1 Exposition Essay By Daniel Goode 5th November Symphony no.1, op.21 in C major was written by Ludwig van Beethoven at approximately the age of 25 and was published in 1801. It is best known for its characteristic 3 note rising motif played in the exposition and it?s harmonically unusual introduction. It is clearly influenced by the works of Haydn and Mozart, however it shows certain musical characteristics unique to the style of Beethoven, including generous use of sforzandi as well as more prominent usage of wind instruments. The symphony consists of four movements; this essay will focus on the first movement: adagio molto (introduction) and later allegro con brio in 4/4. It will cover primarily the structure, thematic details and harmony used in the exposition (bars 13-109) The symphony is scored for 2 flutes, 2 oboes, 2 clarinets in C, 2 bassoons, 2 horns in C and F, 2 trumpets in C, timpani and strings. The first subject begins with a tempo change (moves to allegro con brio, meaning fast ?in a lively spirit) and lasts from bar 13 to bar 33. After the tonally ambiguous introduction (sometimes described as a ?musical joke?) ...read more.

motif played before bars thirteen and nineteen to lead into the tonic note after which the main motif is played. Following the exposition of the first subject, Beethoven begins the bridge passage (which lasts from bar 33-52) firmly in the key of C major after going through the 1-2-5 chord progression played previously. A feature that is repeated from the first subject is the descending semiquaver motif (violins bar 34, woodwind bar 36). This use of the repeated motif showcases the imitation occurring between the strings and the woodwind between bars 33-41. The texture here is much thicker as both the string and woodwind sections play together simultaneously throughout the bridge. The dynamics are also much louder (fortissimo). Beethoven continues to build tension before moving into the second subject by the use of sforzandi between bars 34-40 and a long crescendo during the transition from C to G in bars to 41 45. After the transition, the key of G major is emphasized by the tonic pedal used in the timpani and trombone between the transition and the beginning of the second subject (bars 45-52)- with the exception of bars 49-50, in which they play both G and C. ...read more.

From bars 85-87, there is a crescendo from piano to forte as the harmony moves through an interrupted cadence and a II7b-V7 in bar 87 to G major (I) in bar 88. Here begins the fourth and final main section of the second subject, although it could be considered to be part of the codetta. It is firmly in G major throughout and is a culmination of all the musical elements- such as the original three-note motif from the first subject- that have occurred before. It is perhaps the most energetic section of the movement so far, and Beethoven once again employs the use of fortissimo dynamics and several sforzandi as well as the fast tremolo semiquaver-crotchet motif that appeared previously. The codetta has definitely begun by bar 100, in which the note G is played on the first beat of the bar to signal the end of the previous section with a forte-piano marking. Beethoven introduces a closing tune in the 1st violin part, accompanied by a tonic (G) pedal and punctuated by perfect cadences. He uses several sforzandi once more and affirms a G7 chord with a fortissimo dynamic (in bar 106) in preparation for the return to the exposition. This is followed by a descending, quietening woodwind part outlining the G7 chord in minims. ...read more.