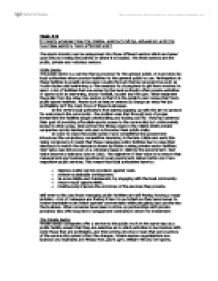 Critically analyse how the media, sports funding, education and the business sectors have affected sport The sports industry can be categorised into three different sectors

Task 5 B Critically analyse how the media, sports funding, education and the business sectors have affected sport The sports industry can be categorised into three different sectors which are based upon who is running the activity or where it is located. The three sectors are the public, private and voluntary sectors. Public Sector The public sector is a service that is provided for the general public. It is provided by local authorities whom provide facilities for the general public to use. Participation at these facilities is greatly encouraged usually through themed programmes such as Muslim ladies only swimming or free sessions for youngsters to get them involved in sport. A lot of facilities that are owned by the local authority often provide activities or sports such as swimming, indoor football, squash and the gym. What separates the public from the other two sectors is that it is the public's own money that funds public sports facilities. Places such as leisure centres do charge an entry fee but profitability isn't the main focus of these businesses. In the 1970's local authority's first started popping up with the aim to provide for everyone in the community. The problem was that through lack of proper investment the facilities began deteriorating and looking scruffy. They had achieved their goal of providing affordable sports access to the community but unfortunately lacked in other areas. Next arrived the fitness craze in the 1980's which private companies quickly latched onto and outmuscled their public rivals. In order to make the public sector more competitive the government introduced the compulsory competitive tendering in the late 1980s and early 90s. Being compulsory it meant that those managing public facilities had to raise their standards to match the standards shown by those running private sector facilities. Best Value was introduced on a voluntary basis in 1998 by the Government. Best Value became a statutory duty in 2003. ...read more.

This is so that they learn all the basic motor skills early on and get into the habit of enjoying physical activity. As well as in primary and secondary schools our young athletes are being further educated and groomed in elite sporting facilities around the country. These national centres of excellence have been set up in key cities countrywide and are designed to meet the needs of young aspiring athletes. These players are put on technical and educational programmes designed to produce sporting excellence in conjunction with personal development. Education in sport has numerous benefits associated with participation in sport. A good standard of physical education in the young will contribute to a sportsperson development at a young age. By this I mean the type of person the player will develop into and whether or not they fulfil their potential. Assuming the player is willing to learn through a good sports education the player could develop into a role model type football instead of your Jermaine Pennant's out there. It's the players that make it to the top that have learnt about their sports nutrition and don't drink and eat the wrong's foods. You learn the basics of nutrition in secondary school P.E and it can make a difference for me whether a player makes it not. Thierry Henry has a great attitude and has developed into a great player whereas the binge drinking Jermaine Pennant has not quite fulfilled his early promise. I'm not saying this is a rule of thumb as you could look at Real Madrid's Ronaldo who's one of the world's greatest whilst being a complete party animal. Physical education in school is where kids learn some of their early social skills and develop their physical skills. For many children, school is the main environment for being physical active, whether through school sport or physical education programmes. It is through school teams where some kids begin their pathway to becoming a professional athlete. ...read more.

The biggest impact that I can think of regarding the media will always involve sky. In 1992, the new FA Premier League signed a ground breaking deal with Rupert Murdoch's satellite sports channel Sky Sports, giving the channel exclusive rights to live coverage of the newly formed breakaway League consisting of the top 22 clubs from the old English League Division 1. This �304 million deal (including highlights fees from the BBC) constituted a massive rise in the fees paid for the right to show live football. It was the catalyst that made the Premiership arguably the biggest footballing league in the world and helped all the British clubs that profited to get on par with the other big European clubs. I remember the days when I used to have to watch Serie A on channel 4 to see the world's best players. Not anymore because over the years with sky's money football clubs have been able to compete and bring the world's biggest starts to the premiership. Sky had a major impact on sport in this country. Not just regarding football sky over the years has coveraged many sports bringing them into the mainstream from cricket all the way down to darts where we all recognise a few of darts legends. As long as sky's money continues to flow into British sport it will enable all the British sports teams to compete at the highest level in the future because they will have the financial status to do so! With more and more options becoming available to watch and learn about our favourite sports such as MANU TV and a golf coaching channel sport is becoming increasingly popular. As long as there are continued high quality media coverage channels like Sky Sports TV and our newspapers I see sport getting more and more popular because these days it is a bit of a status quo to love sport. So the future looks bright on all fronts for British sport (Apart from Chelski and their impact on British football). ...read more.