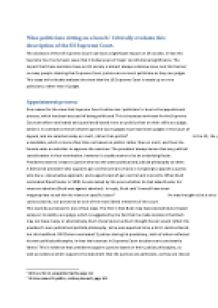 '9 politicians sitting on a bench.' Critically evaluate this description of the US Supreme Court

﻿?Nine politicians sitting on a bench.? Critically evaluate this description of the US Supreme Court. The decisions of the US Supreme Court can have a significant impact on US society. In fact the Supreme Court only hears cases that it believes are of major constitutional significance. The impact that these decisions have on US society is almost always a divisive issue, and this has led to many people claiming that Supreme Court justices are as much politicians as they are judges. This essay will critically evaluate the view that the US Supreme Court is made up on nine politicians, rather than 9 judges. Appointment process One reason for the view that Supreme Court Justices are ?politicians? is due to the appointment process, which has been accused of being politicised. This is because nominees for the Supreme Court are often nominated and questioned based more on politics than on their skills as a judge, which is in contrast to the UK where Supreme Court judges must have been judges in the Court of Appeal, and are selected solely on merit, rather than politics[1]. In the US, the president nominates a candidate, which is more often than not based on politics rather than on merit, and then the Senate votes on whether to approve the nominee. ...read more.

Judicial philosophy The main reason that the 9 Supreme Court justices are described as 9 politicians is because each justice has their own political philosophy which can greatly alter how they decide a case. For example, ?the right to bear arms? could mean that US citizens have the right to own any gun they like, without any restrictions to how they get that gun, or it could mean that US citizens have the right to own one handgun, but must have a licence. This is just 2 ways it could be interpreted, and the Supreme Court has the power to decide what the constitution means. There are 2 philosophies which a judge can hold to varying degrees; strict constructionism and loose constructionism, or judicial restraint and judicial activism. Strict constructionists interpret the constitution in a literal way, trying to fulfil the original intent of the founding fathers. Loose constructionists interpret the constitution in a liberal fashion, being more prepared to move away from the literal interpretation[6]. Judicially activist judges hold the view that judges should use their position to promote desirable social ends, whilst judicially restrained judges believe that any changes to society such as laws in gun control, abortion or the death penalty should be left to the politically accountable legislative and executive branches[7]. ...read more.

This shows that the justices will still act like politicians, even in a restrained court such as the Roberts Court. Judicial body Whilst the court undoubtedly has made decisions which could be described as political, they were created by the founding fathers to check the powers of both Congress and the presidency, and in fulfilling this role, it may mean that they have to make political decisions. They are not politicians which have been elected to make decisions, they are there to interpret the constitution as they see it. If that means that they make decisions which have huge implications for US society as Brown v Board of Education for Topeka or Roe v Wade did, then so be it. Conclusion In conclusion, I don?t think that the description ?nine politicians sitting on a bench? is a fair or accurate one of the Supreme Court. The decisions that the court makes are indeed political, but their job is to interpret the constitution, and they do this as they think the constitution should be interpreted. The court is like a quasi-legislative body, but they act as they believe is right in accordance with the constitution, as they are unaccountable, and therefore do not need to worry about the politics that comes with their decision. ...read more.