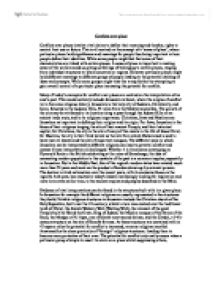 Conflicts over place Conflicts over places involve rival claims to define their meaning and thereby, rights to control their use or future. This is all centred on the concept of a 'sense of place', where particular places hold significance and meanings for people thus being important in how people define their identities. While some people might feel that some of their characteristics are linked with certain places. A sense of place is important in making sense of the world around us giving us feelings of belonging to certain places, ranging from individual structures to whole countries or regions. However particular places might hold different meanings to different groups of people leading to the potential clashing of ideas and concepts. While some groups might take this a step further by attempting to gain overall control of a particular place increasing the potential for conflict. Many of today's examples for conflict over places are centred on the interpretation of an area's past. This would certainly include Jerusalem in Israel, where the origins of conflict lie in the areas religious history. Jerusalem is the holy city of Judaism, Christianity, and Islam. Situated in the Judaean Hills, 35 miles from the Mediterranean Sea. The growth of the city may be attributed to its location along a pass through the Judean Hills on an ancient trade route, and to its religious importance. ...read more.

King David of the Jews established Jerusalem as his capital, confirming Jewish control of the area around 1000 BC. Therefore building the Jewish structures we see today. The Roman Empire also stretched it's influence to Jerusalem, establishing it as a centre for Christian pilgrimage during the early 4th century. Resulting in the Church of the Holy Sepulcher and many other Christian shrines been erected. In the 11th century, Muslim toleration of both Jews and Christians gave way to persecution under the Seljuks, who seized Jerusalem in 1071. Causing the European Christians to respond by launching the Crusades. The Crusaders conquered Jerusalem in 1099 and established a Crusader state. Saladin however recaptured the city for the Muslims in 1187, and the Ayyubid and Mameluke dynasties ruled until 1517, when the Ottoman Empire took control. Many Jews fleeing persecution in Europe had returned to Jerusalem by the 19th century, again forming a majority of the population. The city soon after was taken by British forces, forming part of the British mandate of Palestine between 1922 and 1948. The creation of the state of Israel in 1948 struck fear into Arabs; they saw a Jewish homeland threatening the existence of their religion in the area. ...read more.

This tension was deep rooted as the history for conflict between these religions over Jerusalem stretched back thousands of years. In order for rival claims to involve conflict other factors must be taken into consideration. Political and military factors are especially significant in Jerusalem's case, as they have been used to convey the different religious meanings of Jerusalem. Political forces for example resulted in the establishment of Israel with Jerusalem as it's capital, military forces resulted in the capture of eastern Jerusalem from Arabs in 1967, these all in turn supported the Jewish interpretation of the city. Conflicts over rival interpretations suggest that rival claims are stimulated by fear, fear of what would happen to a place and its future if another group took control, fearing the loss of their sense of place. Arabs feared the loss of their sacred sites in eastern Jerusalem when invaded by Israeli forces. A sense of place is important to these religions, it gives them meaning and significance, defining what they are, giving their followers a positive outlook to the future. Thus explaining the delicate nature of Jerusalem's sovereignty. One may suggest that the only way to solve these rival claims is through compromise. As the roots of conflict are so deep it is potentially difficult to solve them under Jerusalem's current status. Despite this many attempts have been made to bring lasting peace, often under the banner of Middle East peace processes. ...read more.