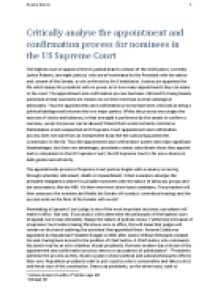 It appears that the Senate?s criteria for successful candidates are not judicial experience or scholastic expertise but ideological founding. Robert Bork in 1987, a distinguished jurist, was rejected because of lacking in ?judicial temperament? because he was a strict contructionalist. Similarly the appointment of Cardazo (1932) was in fact secured by politics. Though politics was actually a defeat over the selection of Paul Freund, though he unquestionably deserved a seat on the bench[12]. Does ones judicial capacity disqualify the role of Supreme Court Justice than judicial ideology? Whilst the appointments and confirmation process may encourage a system of checks and balances, the Senate have abused their power of oversight, in that they don?t test how a nominees merit but their philosophical perspective. And the Senate even perform their own ?litmus test? to see whether a nominee will be a siege engine or a buttress to the administration. For example in a Senate Judiciary Committee, the chair Arland Spector immediately asked nominee Samuel Alito his view on a statement concerning whether the constitution protects the right to abortion [13]. These partisan criteria the Senate have for a nominee is best illustrated by the voting habits in the last 30 years. There has been a rise in the number of polarized votes: Clarence Thomas 52-48 (1991), Samuel Alito 58-42 (2006), Sonia Sotomayor 68-31 (2009) ...read more.

The desire effect of these choices is the hope to reap electoral rewards for these actions by showing symbolic support for the group support?[23]. This seems to parallel with Sonia Sotomayor?s nomination as it believed the reason for moderately high support from Republicans was that they did not want to be seen as Anti-Hispanic[24]. Yet do the motives for nomination outweigh the fact that the US Supreme Court is one of the most diverse of its kind. In conclusion while there are significant disadvantages with the process, the Senate?s criteria for an ideologically compatible nominee, the role of the media and pressure groups in politicising the affair, there are advantages. For example the President may have politicised the nominations by attempting to choose justices who share their political views and philosophy, however politicising the process does not necessarily guarantee how judges will perform. Sonia Sotomayor stated that she ?wouldn?t approach the issue of judging the way the President does?[25]. In other words the inaugurated justices are not obliged to perform the president?s, the Senates or the media?s expectations. The Souter effect best demonstrates this. Additionally the process results in a more diverse Supreme Court, as Presidents choose nominees of a different ethnic groups to not only legitimise their decisions but also to gain electoral support among minority groups. ...read more.