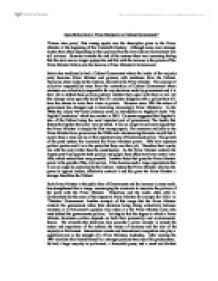 Does Britain have a Prime Ministerial or Cabinet Government?

The elements that determine how powerful a prime minister is include the nature and experience of the cabinet, the nature of economy and the size of the majority in Parliament. International events and international recognition also play a significant part in the strength of a Prime Ministers leadership. After winning the 1997 elections Blair found himself in a stronger position than any of his predecessors. He had a huge majority in parliament, a favourable press, and a weak and divided opposition at a point when the Labour party was more united than at any time previously. He was also fortunate enough to be the first Labour Prime Minister not to inherit an economic crisis. Most western governments were controlled by centre- left parties and he found a natural ally in the kindred spirit Bill Clinton. It was therefore very easy for Blair to assume a dominant and controlling attitude to the role of Prime Minister. His personality and leadership style are also fundamental reasons behind the presidential manner with which he governs. A Prime Ministers power fluctuates greatly depending on his or her character. The impact of Thatcherism in the 1980s caused political scientists to first look at the issue of a presidential Prime Minister. ...read more.

Thatcher would use quasi-regal language referring to herself as 'we'. She had a presidential foreign policy and on several occasions took the military salute, an action associated very much with the President of the United States. She attempted to promote an image of power and did so using huge pictures of herself at party conferences. Blair has adopted many of these methods in a similar attempt to make himself a presidential figure. Prime-ministerial power has increased over the last 50 years due to the power of the public image, the manipulation of the civil service, the control over the Cabinet and the 'hire and fire' power the Prime Minister has over those in government. Despite this these powers are limited to some degree by the strength of the financial backing for important ministers, the unpredictability of public image, and the impossibility of always controlling the Cabinet. The dominance a Prime Minister holds over their government depends more on their personality and the nature of outside factors such as the strength of the economy. The debate as to whether Britain has a cabinet or prime ministerial government continues and opinions vary widely. Some believe that there are still sufficient checks in place to ensure we have a Cabinet government others agree with Michael Foley (2000) who believes 'that the form of cabinet government may have been maintained but not in reality'. ...read more.