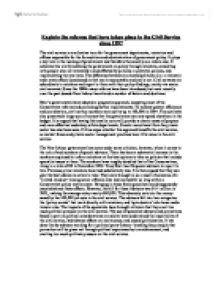 The civil service is a collective term for the government departments, ministries and offices responsible for the formulation and administration of government policy. It plays a key role in the running of government and therefore the country as a whole also. It achieves this role by advising the government on policy through ministers, consulting with people who are interested in and affected by policies or potential policies, and implementing the new laws. The difference between an elected politician (i.e. a minister) and a state official (unelected) is that one is accountable and one is not. Civil servants are subordinate to ministers and report to them with their policy findings, mainly via senior civil servants. Since the 1980s many reforms have been introduced, but most recently over the past decade New Labour has altered a number of factors and doctrines.

Blair’s governments have adopted a pragmatic approach, accepting most of the Conservative reforms and promising further improvements. To achieve greater efficiency and coordination, civil service numbers were cut by up to 100,000 in 2004. The cuts have also preserved a large sum of money that the government can now spend elsewhere in the budget. It is argued that having this smaller core will provide a clearer sense of purpose and more effective leadership within departments. Greater recruitment from the private sector has also been seen. Critics argue whether this approach benefits the civil service, as market forces and private sector management practices have little value in the civil service.

The New Labour government has come under some criticism, however, when it comes to the role of and numbers of special advisers. There has been a substantial increase in the numbers employed to inform ministers on the best options to take on policies that include specialist issues to them. The numbers have roughly doubled that of the Conservatives, rising to a total of 80 in November 2001. Tony Blair has 29 special advisers to report to him. Previous prime ministers have had substantially less. It is then argued that they can give the best advice on action to take. They were brought in as a result of concerns of a ‘limited mind-set’ among senior officials who had worked for so long within a Conservative policy environment. Bringing in these fresh specialists would supposedly counterbalance these effects. However, the bill for these Advisers was £4.4 million in 2001, making the average salary nearly £60,000. This adversely eats into the money saved by the 100,000 job cuts in the civil service. The advisers fall into two categories: the ‘policy wonks’ that work directly with ministers, and ‘spin doctors’ who have media liaison roles. The impacts of the specialists have brought criticism that they exert too much political pressure on the civil service. The use of specialist advisers and promotions based in part on political considerations are said to have undermined the impartiality of the civil service, had adverse effects on meritocracy, and caused politicisation. It has done this by advisers working for a political party-Labour- breaking the principle that promotion will be given not through political experience but on achievement, and exerting too much political pressure on the civil service.

Politicisation is when civil servants become overly involved in political issues. This undermines the principle that civil servants should remain impartial and neutral. It is argued that specialist advisers have contributed to an atmosphere where civil servants are required to tailor their work to the political needs of the government. An example of where this can be seen is the facts and figures published in the 1996 Scott Report on ‘arms to Iraq’ in the lead up to war with Iraq. It assisted the government ministers in misleading parliament about a changing in policy on defence orders. However, the Neill Committee on Standards in Public Life (2000) suggested that the increased number of political advisers had not politicised the civil service. It did, however, recommend a limit on the numbers and a code of conduct for specialist advisers. I though, struggle to see how bringing in these ‘spin doctors’ and ‘policy wonks’ hasn’t- to some extent- altered the way in which the civil service is run and reports to government. As well as this, most civil servants are allowed to vote; so will favour one party over another in some way.

Pivotal changes were seen following the 1988 ‘Next Steps’ report. The civil service lacked innovation and wasn’t providing quality advice or policy delivery. It was also too large to be managed as a single organisation. The reforms separated the policy-making and policy-implementation roles of the civil service. The newly created executive agencies and those that operate along next steps lines, now provide employment for some 73 per cent of civil servants. Examples of agencies are Jobcentre Plus and the Prison Service. Agencies have reported that, over the years, performance has improved, in some cases substantially. Some agencies have also reported significant cost savings.

There have been concerns over the reforms since the 1980s, caused by the radicalism and speed in which they have happened. Some commentators argue that there have been problems that have led to ineffective control and coordination, caused by the separation of the policy advice and service delivery within the civil service. As well as this fragmentation, critics of the managerial reforms argue that what works for a private company will not necessarily work for a government department. There are also long-term financial costs to the state. Moreover, it is now not clear whether agency chief executives or government ministers should be ultimately held responsible for policy failures. Finally, as argued earlier, there has been criticism of politicisation of the civil service.

To conclude, there have been some fundamental reforms, allowing different roles to be split up within the civil service. This has allowed better quality advice and policy delivery, and more innovation. Although benefits of better communication and efficiency were brought as a result of the 100,000 job cuts, a lot of the money saved from these cuts has been reallocated to paying the salaries of the increased number of specialist advisers. Even though the Neill Report denies the politicisation of the civil service, there is strong evidence that suggests it has been to some extent. There have also been smaller reforms and tweaks, such as a People’s Panel of 5,000 citizens to provide feedback on public services.