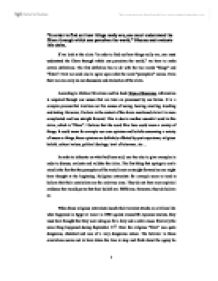 &quot;In order to find out how things really are, one must understand the filters through which one perceives the world.&quot; Discuss and evaluate this claim.

Progressively scientific knowledge was used since the beginning of the Renaissance to explain many natural phenomena that we experience through our life on earth. However, we should never belittle the effect of religious and cultural convictions because, at times, they tend to have a deeper effect on society due to their popularity. The "filter" in this context might be affected by superstition, fear or customs. The example of throwing a young beautiful girl into the Nile River by the ancient Egyptians was done in the hope of pleasing the gods so that flooding of the river would not occur and they would be guarded against evilness. Lack of means and scientific knowledge to control those devastating floods had strengthened this belief in the past. In my opening paragraph I have talked about senses as being a major source of perception. However, I should remind myself that my senses might not always produce the right or correct effects. If I hear a strange voice at night fear can take over. Fear might prompt imagination to think that a wild animal is about to attack me. The "filter" of fear might exaggerate my anticipations. In the end the sound causing my fear would be no more than that of the wind for example. Another important point that we should look at in connection to "things" and "filters" is political ideologies. ...read more.

In this context Saddam became a "thing" and a menace that should be disposed. The pro anti Saddam media created an impression of a "filter" amongst people that the removal of Saddam was the only means to maintain collective security. On the other hand the pro Saddam regime media created another "filter". Saddam was portrayed as a hero, a national Arab hero that was facing up to colonial and imperialist powers on his own. The nationalistic forms of media manipulated people's emotions and created the "filters" of hatred to the west in general, and in particularly U.S.A and Britain. To come back to the claim made by the essay question it is quite clear that political, religious and cultural as well as intellectual filters play important roles in the way people perceive the world. "Things", here, could be issues, people and beliefs. The interaction between any person and the world in which he/she lives in is very complex. Therefore, the word perception should not be restricted to our five senses and the messages they send to the brain to be processed. Past experience, beliefs, the degree to which we can be objective as well as intellectual capabilities of analysis and reflection play important roles in the way we analyze and react to situations outside and inside ourselves. In conclusion the claim of the essay is a true one since it has been shown through the discussion the process in which our value system affects to a large extent our perception of the world. ...read more.