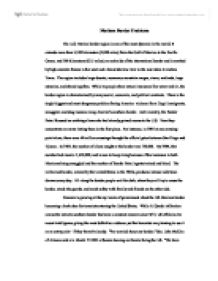 Mexican Border Problems The U.S.-Mexico border region is one of the most dynamic in the world. It extends more than 3,100 kilometers (2,000 miles) from the Gulf of Mexico to the Pacific Ocean, and 100 kilometers (62.5 miles) on each side of the international border and is marked by high concrete fences in the west and a broad shallow river in the east when it reaches Texas. The region includes large deserts, numerous mountain ranges, rivers, wetlands, large estuaries, and shared aquifers. While its people share natural resources like water and air, the border region is characterized by many social, economic, and political contrasts. There is the single biggest and most dangerous problem facing America: violence from illegal immigrants, smugglers and drug runners along America's southern border. Until recently, the Border Patrol focused on catching aliens who had already gained access to the U.S. Now they concentrate on never letting them in the first place. ...read more.

There are "Mexicans" and there are "other than Mexicans" or so called OTMs. The Mexicans know that if they get caught all that happens is that they are deported. But the OTMs are different. They come from other Latin American countries as well as other parts of the world: Afghanistan, Iraq etc. When they cross the border, if there are caught, there are not deported immediately, but are allowed in, pending immigration hearings. They are given an appearance ticket for a court hearing and released into America's population. They don't show up for court, because they know they'll lose the case. These people won't have to walk through miles and miles of desert, they carry cell phones and call 911. The sheriff shows up and arrests them. Then he turns them over to Border Patrol and they do the paperwork, and release them anyway. It's not clear how many terrorists or people having connections to terror groups may have entered the US as OTMs. ...read more.

But they represent real, concrete steps forward in dealing with a large and complex problem. Certainly, they stand in market contrast to some profoundly unhelpful remarks of late by Mexican President Vicente Fox, who has publicly scoffed at U.S. objections to illegal immigration and called efforts to enforce the border, such as the "triple fence" planned for San Diego, "discriminatory" and "against freedom." What make Fox's statements particularly galling are reports that Mexico consistently violates the rights of illegal immigrants crossing its own southern border from Central and South America. The State Department's February Human Rights Practices report cites abuses at all levels of the Mexican government, and charges that Mexican police and immigration officials not only abuse illegal immigrants, but actually participate in trafficking them. I think if President Fox is serious about helping to reduce illegal immigration and its various related problems, he should look in his own back yard. Another good step would be to acknowledge the United States' right to defend its borders and demonstrate perhaps a little less disdain for the rule of law north of the border. ...read more.