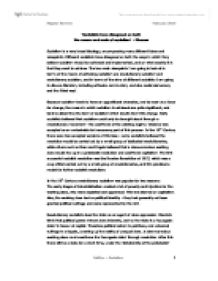 'Socialists have disagreed on both the means and ends of socialism' - Discuss Socialism is a very broad ideology, encompassing many different ideas and viewpoints. Different socialists have disagreed on both the ways in which they believe socialism should be achieved and implemented, and on what exactly it is that they want to achieve. The two main viewpoints I am going to look at in terms of the means of achieving socialism are revolutionary socialism and evolutionary socialism, and in terms of the aims of different socialists I am going to discuss Marxism, including orthodox communism, and also social democracy and the 'third way'. Because socialism tends to have an oppositional character, and be seen as a force for change, the means in which socialism is achieved are quite significant, and tend to determine the form of socialism which results from this change. Early socialists believed that socialism could only be brought about through a revolutionary movement - the overthrow of the existing regime. Violence was accepted as an undesirable but necessary part of this process. In the 19th Century there were two accepted versions of this idea - some socialists believed the revolution would be carried out by a small group of dedicated revolutionaries, while others such as Marx and Engels believed that a class-conscious working class would rise up in a proletariat revolution and overthrow capitalism. The first successful socialist revolution was the Russian Revolution of 1917, which was a coup d'�tat carried out by a small group of revolutionaries, and this provided a model for further socialist revolutions. ...read more.

He thought these crises would deepen as the long-term profit decreased, and that tension would increase as profit was concentrated into fewer and fewer hands. He claimed that capitalist society was becoming 'two great classes facing one another: Bourgeoisie and Proletariat'. The exploited masses would then become the overwhelming majority and could overthrow the corrupt system. Much of Marx's early writing were a critique of capitalism based on the idea of alienation. He claimed that capitalism separates people from their essential nature, and stops them from developing skills, talents and understanding through labour. He also believed that exploitation was an integral part of the capitalist system, because according to his view, the value of a product relates to the quantity of labour needed to make it. Capitalism works by extracting 'surplus value' from workers - paying them less than the value of their labour - so for capitalism to work, workers have to be exploited. This shows that Marx, unlike later socialists, did not see capitalism as being in any way acceptable, and would never have been happy to simply reform or 'humanise' it. Orthodox communism is often seen as 'Marxism in practice', as the Bolshevik Party who took power in Russia in 1917, in the first successful socialist revolution, were dedicated Marxists. They renamed themselves the Communist Party and were the leading authority within communism. Others followed their model and joined Communist International, or 'Comintern'. Therefore Soviet communism was the dominant model of 20th Century communism. However, Soviet communism was not the same as Marxism. ...read more.

They believe in a consensus society, quite different from the original socialist conflict view of society. They highlight the links between different groups and ignore the disparities such as class or economic inequality. In a more knowledge-driven society these inequalities are based more on work-based skills than structural inequalities. 'Third way' thinkers support enterprise and fairness, self-opportunity and security, self-reliance and interdependence. The 'third way' has concentrated more on social inclusion than equality - they support equality of opportunity rather than equality of outcome. This has led to proposals for welfare reform which move away from both the liberal idea of 'standing on your own two feet' and the socialist idea of 'cradle to grave' welfare. The general idea is 'helping people to help themselves', or as Bill Clinton put it, 'a hand up, not a hand out'. While neoliberals think that the state should be used purely as a 'night watchman' and social democrats think it should be used to counterbalance the inequalities in society, 'third way' socialists support a 'competition state', whose main goal should be to ensure national prosperity. It should improve the country's infrastructure and concentrate on improving skills and knowledge - education rather than welfare should be the priority. In conclusion, I would agree that there has been a lot of disagreement within socialism, on whether it should be achieved through revolution or should gradually evolve through democracy, and also on how extreme or how moderate socialism should be. However, all of these different viewpoints are all based around the same principles, of community, cooperation, equality, social class and common ownership, however drastic or moderate these ideas might be. ?? ?? ?? ?? Meghan Rimmer February 2006 1 Politics - Socialism ...read more.