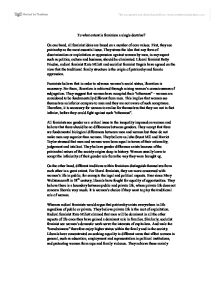 To what extent is feminism a single doctrine?

To what extent is feminism a single doctrine? On one hand, all feminist ideas are based on a number of core values. First, they see patriarchy as the most essential issue. They stress the idea that any form of discrimination or exploitation or oppression against women by men, in any aspect such as politics, culture and business, should be eliminated. Liberal feminist Betty Friedan, radical feminist Kate Millett and socialist feminist Engels have agreed on the view that the traditional family structure is the origin of patriarchy and female oppression. Feminists believe that in order to advance woman's social status, liberation is necessary. For them, liberation is achieved through raising women's consciousness of subjugation. They suggest that women have accepted their "otherness" - women are considered to be fundamentally different from men. This implies that women see themselves as inferior compare to men and they are not aware of such acceptance. ...read more.

Ever since Mary Wollstonecraft in 18th century, liberals have fought for equality of opportunities. They believe there is a boundary between public and private life, where private life does not concern liberals very much. It is women's choice if they want to play the traditional role of women. Whereas radical feminists would argue that patriarchy exists everywhere in life regardless of public or private. They believe private life is the root of exploitation. Radical feminist Kate Millett claimed that men will be dominant in all the other aspects of life once they have gained a dominant role in families. Similarly, socialist feminist see women's domestic work serve the interests of capitalism. And male the "breadwinners" therefore enjoy higher status within the family and in the society. Liberals have concentrated on seeking equality in different areas that affect women in general, such as education, employment and representation in political institutions, and protecting women from rape and family violence. ...read more.

However, majority of feminists have remained faithful to the goal of sexual equality and the belief that it is possible to establish harmony between men and women. New traditions of feminism have developed since 1960s and brought about many different ideas. Black feminism has challenged the tendency within feminism to ignore racial differences. They portray sexism and racism as interlinked systems of oppression. For Islamic feminism, the return to traditional moral and religious principles is a means of enhancing the status of women. Exclusion of women from public life has been viewed as a symbol of liberation. This contradicts completely with conventional feminism. In general, feminists have been concerned with similar core issues such as patriarchy, gender differences and the raising of consciousness. However, the ways in which the traditions have taken the problems are completely different. It seems that the rival traditions of feminism have largely emerged out of established ideologies such as liberalism and socialism. Therefore, it is difficult to say that feminism is a single doctrine. ...read more.