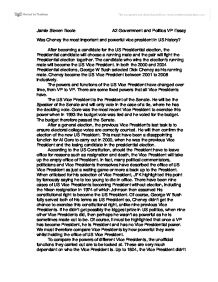 Was Cheney the most important and powerful vice president in US history?

It appears that there is enough evidence to suggest that Cheney was making the big decisions in the Iraq War. In modern politics, the Iraq War has given the US a terrible reputation and quite possibly changed the way the world thinks. Bush has very much been criticised for this yet, it appears that Cheney was the ringmaster and the one responsible for the US' poor reputation. No other Vice President has ever had this sort of influence on military strategy and foreign affairs. The Iraq War alone could possible prove Cheney was the most powerful US President in history. So, although nine Vice Presidents have become the actual President, it appears that Cheney didn't need his President to die, resign or be impeached, to receive Presidential power. Dick Cheney was described as the "Real US President" and the puppet master of George W Bush. A commentator named Ratner said "we will never go back to where we were before him." It appears the office of Vice President is no longer a waiting room. Jamie Steven Boote A2 Government and Politics VP Essay ...read more.