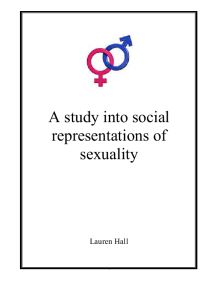 A study into social representations of sexuality

Contents Page Abstract Page 2 Introduction Pages 3-8 Methods Results Discussion References Page 9 Appendix 1 Page 10 Appendix 2 Page 11 Appendix 3 Page 12 Abstract The main aim of this study was to investigate social representations of sexuality through the media of FHM magazine, in terms of body exposure. The hypotheses were that there would be more partially clothed women displayed than partially clothed men, and more fully clothed men displayed than women. This was a content analysis where all people featured in the magazine that were larger than an eighth of an A4 sheet of paper were counted. The men and women were classified separately into two categories: partially clothed or fully clothed. It was found that the greater proportion of those partially clothed were women, and the majority of those fully clothed were men. The results were statistically significant. This study concluded that women are portrayed as sexual objects more than men in FHM magazine. Introduction Social representations are common sense ideas, thoughts, images and knowledge which members of a group share, that help us to interpret and understand our social world. They explain attitudes towards complex concepts such as sexuality, intelligence or education. (However, they differ from culture to culture, for example, the concept of education would mean something different to a Maori tribesman compared to a westernised American.) ...read more.

See Appendix 1 for examples. Procedures Every person displayed in all eight magazines, whether they were female or male from an advertisement, feature or a photograph with an article was counted, on the condition that their bodies occupied a larger space than an eighth of an A4 size sheet of paper. The small advertisements at the back of the magazine were discounted for practical reasons. The men and women were classified separately into two categories: partially clothed or fully clothed. To operationalise our findings precisely and increase inter-rater reliability, it was agreed that a 'fully clothed' person would have to be wearing enough to be considered presentable in public. That is to say a 'partially clothed' person would have areas of the body exposed that would be inappropriate for public display, for example the torso (and breasts in females), buttocks and upper thigh. Pilot Study Our pilot study helped us to ensure our methods were practical, for example, to determine which images should be included in the study. We realised that it would be painstakingly difficult to count every single small advertisement at the back of each magazine, therefore it was decided that they would be discounted. To ensure there was a specific boundary for this rule, it was settled that only the bodies larger than an eighth of an A4 sheet of paper would be included. ...read more.

inferior positions on the floor or superior positions on a chair) or how men and women posed differently (animalistic poses perhaps suggesting submission and inferiority compared to bold, strong, upright poses). If we perceive these results to be an accurate depiction of sexuality in society's view, they are useful in determining certain social representations of men and women. Sexuality was operationalised by the amount of body exposure, and from finding that women were displayed as partially clothed much more than men, we could suggest that this illustrates how women are thought of as sexual objects of desire, supported by Courtney and Lockeretz's (1971) findings (70% of women in the advertisements studied were used for decorative purposes), rather than independent people on a level of equality with men. The equality between the sexes perpetuates against the common sense theory, and therefore is much harder to overcome. Our research could be extended by investigating other magazines that are geared towards different sectors of society, such as teenagers, young women, older women, older men and non-gender magazines - this magazine may be biased towards young men because exposure of women is in their interest. We could use the same method that was applied in this study and compare it to these findings to create a more accurate picture of the general opinion of sexuality in men and women. ...read more.

Design, implementation of the research and analysis are reasonably clear and detailed. Are there ethical considerations to be included? 4*