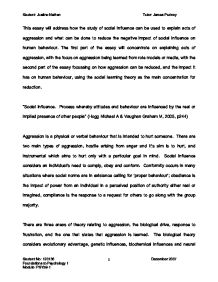 Aggression and the Social Learning Theory

This essay will address how the study of social influence can be used to explain acts of aggression and what can be done to reduce the negative impact of social influence on human behaviour. The first part of the essay will concentrate on explaining acts of aggression, with the focus on aggression being learned from role models or media, with the second part of the essay focussing on how aggression can be reduced, and the impact it has on human behaviour, using the social learning theory as the main concentration for reduction. "Social Influence. Process whereby attitudes and behaviour are influenced by the real or implied presence of other people" (Hogg Michael A & Vaughan Graham M, 2005, p244) Aggression is a physical or verbal behaviour that is intended to hurt someone. There are two main types of aggression, hostile arising from anger and it's aim is to hurt, and instrumental which aims to hurt only with a particular goal in mind. Social influence considers an individual's need to comply, obey and conform. Conformity occurs in many situations where social norms are in existence calling for 'proper behaviour'; obedience is the impact of power from an individual in a perceived position of authority either real or imagined, compliance is the response to a request for others to go along with the group majority. ...read more.

What social influences have caused the mushrooming violence?" (Myers David G 2005, p398). There are, however, within social influence other influences of aggression. "Bandura believes that everyday life exposes us to aggressive models in the family, the subculture and the mass media" (Myers David G 2005, p391). If this quotation is taken literally, then it should be believed that physically aggressive children tend to have been subjected to physically disciplinary parents, who according to Patterson in 1982, "disciplined them by modelling aggression with screaming, slapping and beating" (Myers David G 2005, p391). Aggression, it could be said, is breeding aggression, which leads to the culture viewpoint, in communities where there is a predominant gang culture, especially that of teenage gangs who often give the newly joined junior members aggressive role models, to grow up, worship, imitate and follow, and the newly joined member's desire to comply with the group majority. There is no doubting the fact that children are exposed to a great deal of media violence. There are many influencing categories of media; newspapers, magazines, books, records, films, television, DVDs, and more recently that of interactive computer games. Media is used very cleverly to direct an individuals attention towards particular issues and away from others. Children playing an aggressive computer game is being drawn towards the issue of aggression and fighting to kill, and drawn away from the social norm of aggression and fighting to kills is not usual behaviour. ...read more.

In families, parents would be raising less aggressive children by themselves not rewarding acts of violence from the child, by rewarding good non aggressive behaviour, and by not using punishing behaviour themselves towards the child. (Hogg Michael et al, 2005). There has already been evidence that at the interpersonal level social skills training, non aggressive modelling, anger management and assertiveness training has been effective in teaching people self control, however, it will be linked to a number of varying factors, such as a person's individual learning history, alcohol abuse, the way they handle their own frustration for example. However, much hope for reducing the negative impact on aggression, can be drawn from the social learning approach to aggression which allows changes to take place over a period of time. (Myers David G, 2005) "Never doubt that a small group of thoughtful, committed citizens can change the world" (Mead Margaret, Anthropologist, cited in Myers David G, 2005, p285). In conclusion, the study of social influence, using the social learning theory as the tool, has shown how acts of aggression can be learned through imitation and reward, and how through reversing the process using the social learning theory, the negative impact of social influence on human behaviour can be achieved. Total word count: 2200 Student: Justine Nathan Tutor: James Pudney 1 Student No: 120136 December 2007 Foundations to Psychology 1 Module: PSY59-1 Student: Justine Nathan Tutor: Chris Crooks Level 2 - Counselling Skills November 2007 ...read more.