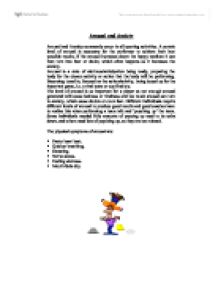 Arousal and Anxiety Arousal and Anxiety commonly occur in all sporting activities. A certain level of arousal is necessary for the performer to achieve their best possible results. if the arousal increases above the happy medium it can then turn into fear or doubt, which often happens as it increases the anxiety. Arousal is a state of alertness/anticipation being ready, preparing the body for the chosen activity or action that the body will be performing. Becoming tuned in, focused on the action/activity, being keyed up for the important game, i.e. a rival team or cup final etc. The level of arousal is so important for a player as not enough arousal generated will cause laziness or tiredness and too much arousal can turn to anxiety, which cause doubts or even fear. Different individuals require different levels of arousal to produce good results and good coaches have to realise this when performing a team talk and 'psyching up' the team. Some individuals needed little amounts of psycing up need to be calm down, and others need lots of psyching up, as they are too relaxed. The physical symptoms of arousal are: * Faster heart beat. * Quicker breathing. ...read more.

The drive theory and the invented U theory suggest that a certain level of Arousal is needed to produce good performances. Arousal responses are generated by a variety of means, some automatically and others associated with emotions. Arousal can be recognised by the physical symptoms to distinguish either automatic or associated with emotion i.e. anger, sorrowful. Those that are associated with physical performance are generated by our perceptions of the demands of the situations. In a practise or recreational game the importance of not failing is less. A cup final or league championship game, however have a high level of importance as the player must meet the demands of the situation, team mates, manager, fans and all of this arousal can produce doubt in even the most confident of players. These doubts can, if dwell on them, generate high arousal and may lead to anxiety. Anxiety is an emotional state, similar to fear, associated with physiological and psychological arousal and with feelings of nervousness and apprehension. Anxiety has two components trait anxiety and state anxiety: Trait anxiety- "is a behavioural disposition which predisposes a person to perceive objectivity non-dangerous circumstances as threatening and to respond to these with state anxiety levels disproportionate to the level of threat". ...read more.

The diagram below (Fig.4.) illustrates the optimal arousal levels for six types of tasks. It is important that it is understood that they are all-hypothetical, but can be useful to the teachers and coaches. What seems to be clear from the experience of Gill 1986 is that: * Optimal arousal levels can be identified. * These vary across individuals and activities. * Ability to control arousal is the key to successful performances. Anxiety can be a big problem in sport as it effects many players' performances. The individual can deal with low anxiety with not too much decrease in performance. The main problem is when the player creates excessive amounts of anxiety and the player witnesses a rapid decrease in performances and performs well under thier acceptability. Excessive anxiety is often being associated with the "ego threat" loss of face/perception of in ability to meet the demands of the situations/fear of the injury. If the player realises the effect of anxiety that itself can increase anxiety. With all these high levels of anxiety an increase in arousal and that excessive arousal is associated with decreased performance i.e. the invented U theory. The cognitive anxiety takes up processing capacity and diverts it from the tasks, all these effects can if not controlled, can lead to a complete breakdown in performance. To help lower the chance of excessive anxiety there are many ways to try and overcome the problem: ...read more.