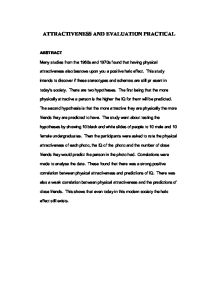 They found that attractive men and women were expected to attain more prestigious occupations than the less physically attractive. This goes some say to say that the IQ of these attractive is predicted to be higher if they assume they will have better jobs. The study also found that participants predicted that more attractive people will be much better partners and will have happier marriages than those who are less attractive. Attractive people in the study were predicted to have higher prospects for their social and professional lives. This study clearly showed that the stereotypes do exist. Chia, Rosina C, Allred, L J, Grossnickle, W F and Lee, G W did a study of the effects of physical attractiveness on perceptions of academic success, achievement-related traits, IQ, initiative, and attributions of ability and effort in relation to academic success. The participants were 144 U.S. undergraduates who observed photographs of attractive and unattractive men and women and then rated the persons in the photographs on the traits mentioned. The study found that being seen as physically attractive created positive impressions of achievement-related traits for men but negative impressions for women. All of the studies cited above indicated that the positive halo effect does exist. These are what have lead to the two hypotheses that the more physically attractive a person is considered to be the more intelligence they will be assumed to have and the more close friends the will be assumed to have. ...read more.

Although the findings in this study seem to be quite clear, more research in the future should look at whether opinions of people do change of an attractive person after they have gotten to know the person. In Lisa Bazil's study 175 fourth and fifth grade girls were randomly assigned to rate the attractiveness, intelligence, and popularity of either a physically attractive or unattractive girl shown in a videostill photograph. They also rated how much they would like the girl. They then viewed the same girl in a series of 10-videotaped vignettes, that showed the girl interacting with a peer in either a positive, negative or neutral manner. Initial ratings of the girls exposed important differences between the attractive and the unattractive girls. But later, behaviour was a strong moderating factor in peer judgments, specifically, positive behaviours, which considerably increased and negative behaviours considerably decreased ratings of attractiveness and other social judgments regardless of the physical attractiveness level of the girl, and eliminated differences in apparent attractiveness between the two girls. In conclusion a lot more research does need to go into this area and the causes about why people have these stereotypes also need to be considered. But for now it is evident that even in todays society these stereotypes most definitely do exist. Which for some is a blessing and for others a curse. ...read more.