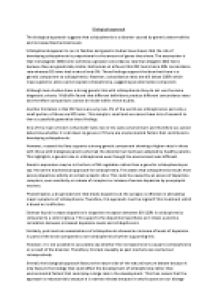 ﻿Biological approach The biological approach suggests that schizophrenia is a disorder caused by genetic abnormalities and increased biochemical levels. Schizophrenia appears to run in families and genetic studies have shown that the risk of developing schizophrenia is proportional to the amount of genes they share. The assumption is that monozygotic (MZ) twins will show a greater concordance rate than dizygotic (DZ) twins because they are genetically similar. Gottesman et al found that MZ twins had a 50% concordance rate whereas DZ twins had a rate of only 9%. These findings support the idea that there is a genetic component to schizophrenia. However, concordance rates are still below 100% which means genetics alone cannot explain schizophrenia, suggesting an alternative component. Although twin studies show a strong genetic link with schizophrenia they do not use the same diagnostic criteria. ...read more.

However, research by Kety supports a strong genetic component showing a higher rates in those with those with biological parents who had the disorder but had been adopted by healthy parents. This highlights, a genetic role in schizophrenia even though the environment was different. Genetic expression may be in the form of DA regulation rather than a gene for schizophrenia per say. Hence the biochemical approach for schizophrenia. This states that schizophrenia results from excess dopamine activity at certain synaptic sites. This could be caused by an excess of dopamine receptors, over sensitivity or release of receptors or release of excess dopamine by presynaptic neurons. Phenothiazine, a drug treatment that blocks dopamine at the synapse is effective in alleviating major symptoms of schizophrenia. Therefore, this approach must be logical if this treatment which is based on is effective. ...read more.

Therefore, this lack causality as post mortems are carried out retrospectively. Overall, the biological approach favours the nature side of the nature/nurture debate because it only favours the biology that could affect the development of schizophrenia rather than environmental factors that could play a large role in the development. This then means that the approach is reductionistic because it is narrow minded because it only focusses on our biology only and doesn?t consider behavioural or cognitive contributions. Lastly, this approach suggests we are a product of our biology and ignores free will making this approach deterministic. Given that no biological explanation accounts for all cases of schizophrenia or even for all aspects of the disorder within an individual, it seems likely that social and psychological factors play a part, and therefore a more holistic explanation is needed. ...read more.