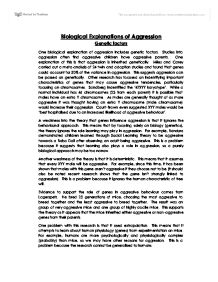 Biological Explanations of Aggression Genetic factors One biological explanation of aggression includes genetic factors. Studies into aggression often find aggressive children have aggressive parents. One explanation of this is that aggression is inherited genetically. Miles and Carey carried out a meta-analysis of 24 twin and adoption studies and found that genes could account for 50% of the variance in aggression. This suggests aggression can be passed on genetically. Other research has focused on indentifying important characteristics of genes that may cause aggressive tendencies, particularly focusing on chromosomes. Sandberg indentified the '47XYY karyotype'. While a normal individual has 46 chromosomes (23 from each parent) it is possible that males have an extra Y chromosome. As males are generally thought of as more aggressive it was thought having an extra Y chromosome (male chromosome) would increase their aggression. Court-Brown even suggested XYY males would be 'best hospitalised due to an increased likelihood of aggressive behaviour'. A weakness into the theory that genes influence aggression is that it ignores the behavioural approach. This means that by focusing solely on biology (genetics), the theory ignores the role learning may play in aggression. ...read more.

Furthermore, increases in dopamine activity via the use of amphetamines have been linked with aggression, while Buitelaar found that antipsychotics which reduce dopamine activity also lower aggression levels in violent delinquents. Neural explanations of aggression can be criticised for ignoring the behavioural approach. This means that by focusing solely on biology (neurotransmitters) the theory ignores the role learning may play on aggression. For example, Bandura demonstrated children learned through Social Learning Theory to be aggressive towards a Bobo Doll after observing an adult being aggressive. This is a problem because it suggests that learning also plays a role in aggression, so a purely biological approach may be too narrow. Another weakness of neural explanations of aggression is that they are reductionist. This means that they take a complex behaviour (aggression) and reduce it down to its basic parts (neurotransmitters). For example, the explanations do not take into account external factors, such as institutionalisation, which research has shown to increase aggression levels. This is a problem because although focusing solely on neurotransmitters makes the theory more measurable, it could be ignoring other important factors, making the theory too simplistic. ...read more.

This is a problem because it suggests that learning also plays a role in aggression, so a purely biological approach may be too narrow. Another weakness of the model is that it is deterministic. This means that it assumes that all women will act aggressively when they experience the hormone shifts that accompany PMT. This is misleading because many women, for example, do not exhibit any aggressive behaviour if they choose not to, even if they feel aggressive. This is a problem because the model ignores the human characteristic of free will. Evidence to support the 'Basal Model of Testosterone' comes from Dabbs et al. They measured salivary testosterone levels of violent and non-violent criminals. A correlation between testosterone levels and number of aggressive crimes committed was found. This supports the model by suggesting that the high levels of testosterone caused the criminals to exhibit more aggressive behaviour. One weakness of this research is that it only correlational. This means that only a link between testosterone levels and the number of aggressive crimes committed can be established. For example, other factors (extraneous variables) may have caused the correlation, such as a subjective opinion as what counts as an 'aggressive' crime. This is problematic as it means that a cause and effect relationship cannot be established between the two variables. ...read more.