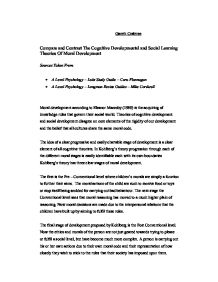 Gareth Crabtree Compare and Contrast The Cognitive Developmental and Social Learning Theories Of Moral Development Sources Taken From: * A Level Psychology - Letts Study Guide - Cara Flannagan * A Level Psychology - Longman Revise Guides - Mike Cordwell Moral development according to Eleanor Maccoby (1980) is the acquiring of knowledge rules that govern their social world. Theories of cognitive development and social development disagree on core elements of the rigidity of our development and the belief that all cultures share the same moral code. The idea of a clear progressive and easily chartable stage of development is a clear element of all cognitive theorists. In Kohlberg's theory progression through each of the different moral stages is easily identifiable each with its own boundaries Kohlberg's theory has three clear stages of moral development. The first is the Pre - Conventional level where children's morals are simply a function to further their aims. The moral actions of the child are such to receive food or toys or stop itself being scolded for carrying out bad behaviour. The next stage the Conventional level sees that moral reasoning has moved to a much higher plain of reasoning. ...read more.

This influence that the media has on a persons moral development is also tied into the idea of society, as the media has an ever-increasing relevance on our everyday lives. The two clearly disagree on the idea of societies having the same moral codes and believes. A key area of Kohlberg's theory is the idea of moral universalism. This is a belief that certain moral believes are present in all cultures of the world. This view is the most challenged of Kohlberg's theory and does the most to detract form its validity. Piaget's study also had this element of moral universalism (Linaza 1984) found the same development in Spanish children as in other western cultures, supporting the ideal of moral universalism. Gareth Crabtree Bandura believes that morals are only relative to a particular culture. Each culture has its own moral rules that only apply to their culture. The Vasduez and Hummel study (1987) carried out moral reasoning interviews on Indian subjects, in an effort to see how they would respond to moral dilemmas. It was found that as they were obviously much poorer than American's who had also completed the tests, their responses were very different. ...read more.

Its role is further extenuated as it is cited as a way to seek external or internal reinforcement The social learning theory of Kohlberg believes that the changes in moral thought of a person are a clear progression, as the child gets older. A person simply progresses along the stages of development, with only an approximate ten percent of the population reaching the highest levels of moral development. A further studying of the research date of Kohlberg devalues this idea of clear progression. Snarey (1985) found that only 15% of research subjects reached level five of development and none reached the highest level of development. This evidence further makes such a stage structure seem irrelevant and misguided. Bandura's theory starkly disagrees with idea of such structured moral development. Instead Bandura sees this progression of moral development as a process that continues throughout life. Moral development cannot be simply placed at stage, but is in fact the gathering of new responses to moral problems as a person moves through life. The social element of Bandura's theory again comes into the fore with the idea of the continuation of moral development, as person progresses through life. The child is seen to reach a level of maturity, once they have developed a wide range of possible reactions to a moral dilemma. . ...read more.