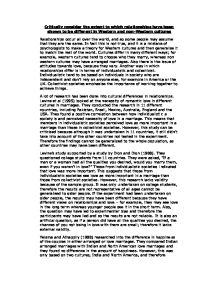 Critically consider the extent to which relationships have been shown to be different in Western and non-Western cultures Relationships occur all over the world, and so some people may assume that they are the same. In fact this is not true, and it is a mistake of psychologists to make a theory for Western cultures and then generalise it to match the rest of the world. Cultures differ in many different ways; for example, western cultures tend to choose who they marry, whereas non western cultures may have arranged marriages. Also there is the issue of attitudes towards love, because they vary. Another way in which relationships differ is in terms of individualistic and collectivist. Individualistic tend to be based on individuals in society who are independent and don't rely on anyone else, for example in America or the UK. Collectivist societies emphasise the importance of working together to achieve things. ...read more.

Those from individualistic societies indicated that love was more important. This suggests that those from individualistic societies see love as more important in a marriage than those from collectivist societies. However, this research lacks validity because of the sample group. It was only undertaken on college students, therefore the results are not representative of all ages cannot be generalised to older people. If the experiment had been undertaken on older people, the results may have been different because they have different views on relationships and love - for example, they may see love in the long term whereas younger people see it in the short term. Also, the question may have led to experimenter bias and therefore the participants may have lied and so the results are not reliable. It is also an artificial question, as if a person did have all the qualities you desired, the chances of you not being in love with them are small; therefore it lacks external validity. ...read more.

For example, not all collectivist societies have arranged marriages so other countries may a happier view of love. Therefore the results cannot be generalised to countries outside of China. A general criticism of all of the studies mentioned is that they use biased sample groups, for example, only students. Sears (1986) found that students react differently to other sections of the population when participating in psychological research, so the results cannot be generalised to the whole population. There is also an observer bias of how the experimenter interprets data. This is because it is based on the experimenter's own culture, for example in Britain female circumcision is seen as wrong but in other parts of the world it is seen as necessary. Finally, psychological tools used to measure people such as IQ tests and questionnaires about relationships are designed for one culture, and therefore the same questions and tests may not apply to other cultures or they may have different meanings. ...read more.