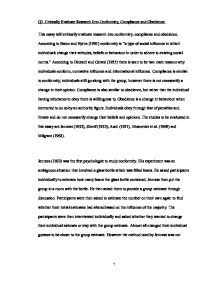 Q1. Critically Evaluate Research Into Conformity, Compliance and Obedience. This essay will critically evaluate research into conformity, compliance and obedience. According to Baron and Byrne (1991) conformity is "a type of social influence in which individuals change their attitudes, beliefs or behaviour in order to adhere to existing social norms." According to Deutsch and Gerard (1955) there is seen to be two main reasons why individuals conform, normative influence and informational influence. Compliance is similar to conformity, individuals still go along with the group, however there is not necessarily a change in their opinion. Compliance is also similar to obedience, but rather that the individual having reluctance to obey there is willingness to. Obedience is a change in behaviour when instructed to do so by an authority figure. Individuals obey through fear of penalties and threats and do not necessarily change their beliefs and opinions. The studies to be evaluated in this essay are Jenness (1932), Sherif (1935), Asch (1951), Moscovici et al. (1969) and Milgram (1963). Jenness (1932) was the first psychologist to study conformity. His experiment was an ambiguous situation that involved a glass bottle which was filled beans. ...read more.

However Milgram rejected this criticism because in his view this ethical problem does not exist as none of the participants were forced to do anything against their will. Baumrind (1964) also criticises Milgram's research because the subjects may have suffered some sort of permanent psychological damage resulting from the experience they had. Milgram however defends himself because one year after the experiment had taken place they were examined by a psychiatrist who found no evidence of any psychological damage. In conclusion all of the research evaluated in the assignment has brought to light the lengths to which human beings will go to conform, comply and obey. However as these experiments lack ecological validity the results cannot be generalised beyond the laboratory situations in which they took place. Although some of the experiments especially Milgram's (1963) study of obedience has attracted much criticism, it has bought with it new ethical guidelines which in turn has helped future research. A strong criticism of all these studies is that deception was involved in some way, however without the use of deception there was no way of getting true results. The number of times these experiments have been repeated and replicated shows the importance of the issues that these experiments have risen. [Word Count 1,513] ?? ?? ?? ?? 1 ...read more.