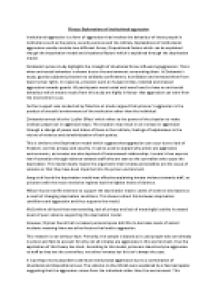 Transfer-Encoding: chunked ﻿Discuss Explanations of institutional aggression Institutional aggression is a form of aggression that involves the behaviour of those people in institutions such as the police, security services and the military. Explanations of institutional aggression usually consider two different forces, Dispositional factors which can be explained though the importation model and situational factors which is explained through the deprivation model. Zimbardo?s prison study highlights the strength of situational forces influencing aggression. This is when anti-social behaviour is shown due to the environment surrounding them. In Zimbardo?s study, guards subjected prisoners to solidarity confinement, humiliation and removed them from basic human rights. In response, prisoners went on hunger strikes, rebelled and showed aggression towards guards. All participants were tested and were found to have no anti-social behaviour which means results from this study are highly in favour that aggression can stem from the environment cues. ...read more.

Jiang et al found the deprivation model was effective explaining inmate violence towards staff, as prisoners with the most restrictive regimes had the highest levels of violence. Wilson found real life evidence to support the deprivation model. Levels of violence decreased as a result of changing deprivation conditions. This shows a direct link between deprivation conditions and aggression and thus supports the model. McCorkle et al found that overcrowding, lack of privacy and lack of meaningful activity increased levels of peer violence supporting the deprivation model. However, Nijman found that increased personal space did little to decrease levels of violent incidents meaning there are other factors that lead to aggression. This research is not without fault. Primarily, the sample is biased as it used people who are already in prison and fails to account for why not all inmates are aggressive in this environment, thus the application of this theory lies short. ...read more.

Therefore, this makes application of these explanations and their findings difficult to real life. It is reductionistic to assume that one of these is the sole reason for aggression. These explanations for institutional aggression undermines the influence of the biological approach. Although dispositional explanations emphasises the role of the individuals this is descriptive rather than explanatory. For instance, the well-established link of testosterone and aggression. As a result these explanations can be criticised for being too simplistic and therefore cannot account for all aggression and would benefit from a combination of approaches. Furthermore, attributing aggression to depositional cues removes responsibility form the individual and limits their sense of free will over their actions. This is seen as a deterministic view of aggression in institutions. To conclude, there are several models that are able to explain different aspects of aggression in institutions however, there is not a model that is able to accurately explain all aspects of institutional aggression. Therefore a multi-modal approach that includes all factors such as importation, situational and dehumanisation, would be a more valid explanation. ...read more.