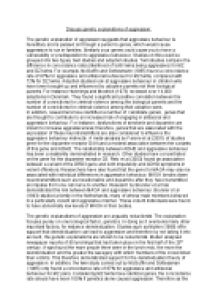 ﻿Discuss genetic explanations of aggression: The genetic explanation of aggression suggests that aggressive behaviour is hereditary and is passed on through a person?s genes, which would cause aggression to run in families. Similarly your genes could cause you to have a vulnerability or predisposition to aggressive behaviour. Studies on this could be grouped into two types, twin studies and adoption studies. Twin studies compare the difference in concordance rates (likelihood of both twins being aggressive) for MZ and DZ twins. For example, McGuffin and Gottesmann (1985) found a concordance rate of 87% for aggressive and antisocial behaviour for MZ twins, compared with 72% for DZ twins. Adoption studies look at aggressive behaviour in children who have been brought up and influenced by adoptive parents not their biological parents. For instance Hutchings and Mednick (1973) reviewed over 14,000 adoptions in Denmark. They found a significant positive correlation between the number of convictions for criminal violence among the biological parents and the number of convictions for criminal violence among their adoptive sons. ...read more.

Studies such as Mullen (1986) offer support that deindividuation can lead to aggression and therefore by not taking it into account, the genetic explanations are shown to be reductionist. Mullen analysed newspaper reports of 60 lynchings that had taken place in the first half of the 20th century. It was found the more people there were in the lynch mob, the more the deindividuation and the greater the savagery with which members of the crowd killed their victims. This therefore demonstrated support for the deindividuation theory of aggression. In addition, the twin study carried out by McGuffin and Gottessman (1985) only found a concordance rate of 87% for aggressive and antisocial behaviour for MZ pairs. Considering MZ twins have identical genes, the concordance rate should have been 100% if genetics alone caused aggression. Therefore as the concordance rate was not 100% this indicates that there must be other factors involved, therefore making the genetic explanations of aggression reductionist as they fail to take these into account. ...read more.

It suggests that if a person has these ?aggressive? genes then they will inevitably be aggressive and that a person does not have the power to control it. Some legal experts have questioned the assumption that a violent offender can still exercise free will despite possessing a genetic predisposition to violent crime. For example in 2009 an Italian judge decided to reduce the prison sentence of a person convicted of murder because he was found to be the carrier of genetic variants thought to be associated with a predisposition to aggressiveness (Forzano et al 2010). This supports the idea that a person genetically predisposed to aggression cannot exercise free will as to whether they will be aggressive or not, making the genetic explanation of aggression deterministic. However, Hines and Malley-Morrison (2005) claim that the finding that aggressive behaviour might be genetically influenced simple means that some people, as a result of their genotype are more likely to commit aggressive acts than people without the genotype. Therefore instead of being deterministic, the genetic explanation could be probabilistic. ...read more.