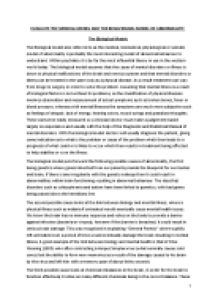 EVALUATE THE MEDICAL MODEL AND THE BEHAVIOURAL MODEL OF ABNORMALITY

﻿EVALUATE THE MEDICAL MODEL AND THE BEHAVIOURAL MODEL OF ABNORMALITY. The Biological Model: The Biological model also referred to as the medical, biomedical, physiological or somatic model of abnormality is probably the most interesting model of abnormal behaviour to understand. Within psychiatry it is by far the most influential theory in use in the western world today. The biological model assumes that the cause of mental disorders or illness is down to physical malfunctions of the brain and nervous system and that mental disorders or illness can be treated in the same way as a physical disease. As a result treatment can vary from drugs to surgery in order to solve the problem. Assuming that mental illness is a result of biological factors is not without its problems, as the classification of physical illnesses involves observation and measurement of actual symptoms such as broken bones, fever or blood pressure, whereas with mental illnesses the symptoms are much more subjective such as feelings of despair, lack of energy, hearing voices, mood swings and grandiose thoughts. These cannot be easily measured so a clinician/doctor must make a judgement based largely on experience and usually with the help of the Diagnostic and Statistical Manual of mental disorders. With the biological model doctors will usually diagnose the patient, giving some indication as to what is the problem or cause of the problem which then leads to a prognosis of what could or is likely to occur which then results in treatment being effected to help stabilise or cure the illness. The biological model puts forward the following possible causes of abnormality, the first being genetics where genes inherited from our parents provide the blueprint for our bodies and brain, if there is any irregularity with the genetic makeup then it could result in abnormalities within brain functioning resulting in abnormal behaviour. The idea that disorders such as schizophrenia and autism have been linked to genetics, with bad genes being passed down the hereditary line. ...read more.

Mental illness does not show up in blood tests or x-rays and there are no bodily symptoms as it is all in the head. As there are no physical tests it does pose problems for doctors in diagnosing the problem in some cases, as they can only treat according to the symptoms presented to them. The medical model has been the one that has been most influential in determining the way that mentally ill people are treated, but most psychologists would say that at best, it only provides a limited explanation and may even be totally inapplicable. References: Pete Waring (2006). Abnormality. [ONLINE] Available at: http://psychology4a.com/Abnormal%206.htm. [Last Accessed 5 January 2013]. McLeod S (2008). The Medical Model. [ONLINE] Available at: http://www.simplypsychology.org/medical-model.html. [Last Accessed 6 January 2013]. Tobin S (). Understanding Abnormality. [ONLINE] Available at: http://highered.mcgraw-hill.com/sites/dl/free/007337069x/666309/haL7069X_ch01.pdf. [Last Accessed 5 January 2013]. The Behavioural model: The behavioural model of abnormality was the dominant model in psychology in the first half of this century. The behavioural mode assumes that all behaviour whether normal or abnormal can be learned or unlearned through the processes of classical and operant conditioning. The model further argues all species learn in the same way which is referred to as ?General Process Learning?. From the beginning behaviourists argue that psychology is a science and support it with scientific evidence which can be observed. However behaviourists tend to ignore a person?s thoughts or feelings as they cannot be observed. We learn by interacting with the world around us, especially by the way our environment operates on us. Classical conditioning was first proposed by Ivan Pavlov in the late 19th century. Classical conditioning is a form of learning in which the conditional stimulus (CS) comes to signal the event of a second stimulus, the unconditioned stimulus (US). A stimulus is a factor that causes a response in an organism. The unconditional stimulus (US) is usually a stimulus such as food or pain that provokes a response from the beginning, this is called the unconditioned response (UR). ...read more.

Those that argue for the behavioural model also point out the model has led to therapies which have had high success rates in their approach to treating abnormal behaviour. Another positive of the model is there is supporting research to back the claims its makes, such as Fearn & Becker?s research in the eating habits of the Fijian girls. The aims of behavioural model were to move psychology towards a scientific model which focused on the observation and measurement of behaviour. Its assumptions were that behaviour is largely the result of the environment rather than genetics or instincts, and in doing so the behavioural model rejects the view that abnormal behaviour has a biological basis which many critics argue. A major criticism of this model is it does not try to make sense of our thoughts and emotions and looks at the mind as a blank slate (tabula rasa) unlike the psychodynamic approach, this is seen as one of its downfalls as it is seen as reductionist it taking complex human behaviour and attempting to explain it in very simple terms, often using laboratory experiments that lack ecological validity. The model has frequently been criticised as behaviourists only consider surface characteristics or symptoms, when treating a phobic response such as fear or panic for example the behaviour model does not address the underlying cause of the problem. Attempts made to explain depression and in particular schizophrenia have not been successful as the model ignores genetics or brain chemistry which from studies and drug treatments have shown plays a part. Those that argue ask how delusions or hallucinations can be developed through learning or imitation. Importantly the behavioural model assumes that mental illness is caused by events around us, it believes that the patient is not to blame for their behaviour and therefore the illness is accountable for their actions. The final criticism of the behaviourist is that of ?General Process Learning? which argues that all species learn in the same way but does not take into account factors such as language or socialisation. ...read more.