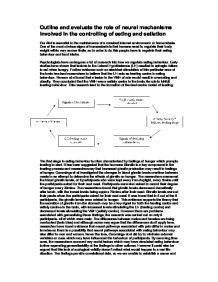 Outline and evaluate the role of neural mechanisms involved in the controlling of eating and satiation Our diet is essential to the maintenance of a constant internal environment- or homeostasis. One of the most obvious signs of homeostasis is that humans need to regulate their body weight within very narrow limits; so in order to do this people have to regulate their eating behaviour and food intake. Psychologists have undergone a lot of research into how we regulate eating behaviour. Early studies have shown that lesions to the Lateral Hypothalamus (LH) resulted in aphagia- failure to eat when hungry. Further evidence such as electrical stimulation of this particular area of the brain has lead researchers to believe that the LH acts as feeding centre in eating behaviour. Ranson et al found that a lesion in the VMH of rats would result in overeating and obesity. They concluded that the VMH was a satiety centre in the brain, its role to inhibit feeding behaviour. This research lead to the formation of the dual centre model of feeding: The first stage in eating behaviour is often characterised by feelings of hunger which prompts feeding to start. ...read more.

and decreased levels stimulating the VMH (satiety centre). However there are problems associated with generalising these findings; the research was carried out on only 6 participants- all of which were male. The differences between males and females are being overlooked (beta bias) and although some may argue that the differences don't apply here, researcher have found evidence that neural pathways associated with pain differ in males and females so there is a possibility that neural pathways associated with eating behaviour may also differ in men and women. Never the less, Cummings et al did try to minimise external variables or cues which may have influenced the behaviour of participants. By removing time cues, the researchers removed any social factors which may have simulated eating behaviour further expanding generalisability of the findings to other cultures. However it could also be argued that this lack of ecological validity doesn't reflect what would happen in a real life situation. The findings provide correlational data, so we are unable to establish a cause and effect and there may be other factors which influence hunger- this is show by the fact that people who have had their ...read more.

Further evidence to support the role of CCK comes from studies showing that animals with a gene mutation eliminating the CCK system over eat and become obese. The role of neural pathways in control of eating behaviour is an aspect of the biological approach, this means that most of the findings from studies are likely to be objective (based on observable phenomenon) and replicable which are two major components central to science. Despite this, the approach is heavily reductionist in that it ignores social and psychological aspects of eating behaviour. For example it fails to explain why we eat even though we are not hungry or in a state of satiety, the reason to this issue is likely to be in the behavioural explanation of eating behaviour e.g. the role of social learning and scheduled feeding. A further criticism of the role of neural mechanisms, in the control of eating and satiation, is that the view is very deterministic and sees behaviour as mostly determined by our brain structure and genetic makeup. This leaves little room for free will, implying that an individual cannot be held responsible for his/her own actions. ...read more.

This essay makes some good points with careful choice of theory and research. Perhaps include a little more discussion of the psychological factors such as the role of stress in overeating, powerful habits and even the smell of freshly baked cakes or coffee. 4*