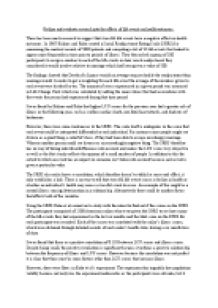 ﻿Outline and evaluate research into the effects of life events on health outcomes: There has been much research to suggest that stressful life events have a negative effect on health outcomes. In 1967 Holmes and Rahe created a Social Readjustment Rating Scale (SRRS) by examining the medical records of 5000 patients and compiling a list of 43 life events that tended to appear more frequently in time prior to periods of illness. They then asked a group of 100 participants to assign a number to each of the life events on how much readjustment they considered it would involve relative to marriage which had been given a value of 500. The findings showed that Death of a Spouse would on average require double the readjustment than marriage would. In order to get a weighting for each life event the average of the numbers given to each event were divided by ten. ...read more.

In addition to this the extent to which an event has an impact on someone isn?t taken into account because each event is given a particular value. The SRRS also only shows a correlation, which therefore doesn?t establish a cause and effect; it only establishes a link. There is no way to tell that stressful life events cause a decline in health or whether an individual?s health may cause a stressful event to occur. An example of this might be a mental illness causing deterioration in a relationship. Alternatively there could be another factor that affects both of the variables. Using the SRRS Rahe et al carried out a study with the intent to find out if the scores on the SRRS. The participants comprised of 2500 American sailors who were given the SRRS to see how many of the life events they had experienced in the last six months and the total score on the SRRS for each participant was recorded. ...read more.

to that group of people, they might all suffer from the same illnesses as if one sailor had it, it could be passed around the other sailors on that ship. Alternatively they could all have fairly good immune systems to start with due to the fact they might need to pass medical tests in order to be a sailor. In addition to this, stress could be inherent in the job as a sailor which may mean they are more susceptible to stress than other individuals, for instance having to deal with being separated from their loved ones for long periods of time. Rahe et al?s research is also reliant on retrospective of the sailors, which could have two effects. Participants could find it difficult to recall accurately, due to the fact it is relying on their memory. Or, a participant might exaggerate. This could lead to the results being inaccurate and therefore reduces the reliability of the result the study yeilded. ...read more.