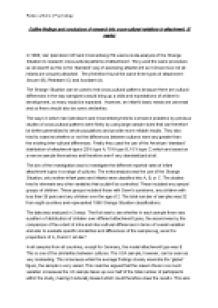 Outline findings and conclusions of research into cross-cultural variations in attachment. (6 marks)

﻿Rebecca Burns | Psychology Outline findings and conclusions of research into cross-cultural variations in attachment. (6 marks) In 1988, Van Ijzendoorn MH and Kroonenberg PM used a meta-analysis of the Strange Situation to research cross-cultural patterns of attachment. They used the same procedure as Ainsworth as this is the ?standard? way of assessing attachment as it shows how not all infants are securely attached. They therefore found the same three types of attachment: Secure (B), Resistant (C) and Avoidant (A). The Strange Situation can be used to test cross-cultural patterns because there are cultural differences in the way caregivers would bring up a child and expectations of children?s development, so many would be expected. ...read more.

The meta-analysis was the use of the Strange Situation, only mother-infant pairs and infants were classified into A, B, or C. The studies tried to eliminate any other variables that couldn?t be controlled. These included any special groups of children. These groups included those with Down?s syndrome, any children with less than 35 pairs and any children over the age of 2. The total number of samples was 32 from eight countries and represented 1990 Strange Situation classifications. The data was analyzed in 3 ways. The first was to see whether in each sample there was a pattern of distribution of children over different attachment types, the second was by the comparison of the extent of intra and inter-cultural differences in terms of overall variation and also to evaluate specific similarities and differences of the samples eg, were the proportions of A, B and C similar? ...read more.

This also brings the issue of unfair distribution. Intra and inter-cultural comparisons produced some interesting findings. Firstly, one of the German samples was different to another (Berlin) as this sample was from an Israeli kibbutzim sample. Secondly, the Japanese sample from Tokyo was more like one of the US samples than the other. Lastly, the Israeli city sample was more like one of the US samples than the other Israeli (kibbutzim) sample. Using all of the data, Van Ijzendoorn and Kroonenberg found that the intra-cultural variation was nearly one and a half times the size of the inter-cultural variation. This means that there bigger differences within cultures than there were between them. In Germany and the USA, intra-cultural variation is very large, whereas between the Netherlands and Japan there is very little variation. The Japanese and Israeli samples contributed the most to cross-cultural differences. ...read more.

This essay is asking for an 'outline' which is given here. However it is also asking for conclusions so it is fine to add a couple of interpretative comments too. 4*