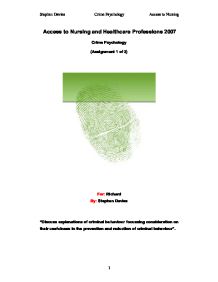 All this usually starting before an individual reaches the age of 15. The following symptoms are associated with Anti-social Personality Disorder: Failure to conform to social norms relating to lawful behaviour, irritability and aggressiveness, impulsivity or failure to plan ahead, lack of remorse, deceitfulness and reckless disregard for the safety of self or others. According to Eysenck, Widiger and Corbitt (1995) found that between 40% and 75% of prisoners suffer from Anti-social Personality Disorder. Farrington (2000), reported findings from a British longitudinal study of men. The findings were, "...of 10-year-olds having a parent who had been convicted of crime, almost half had an anti-social personality at the age of 32. They were also very likely to have committed several crimes". (Eysenck, Michael W. 2004). Farrington's findings could however, mean more than one thing. The first is whether or not the child in question is influenced to 'conform' in a way that that child has grown accustomed to, or, if the biology of anti-social behaviour is true, then it could be said that there is a possibility that Anti-Social Personality Disorder is a hereditary condition. Just to be clear on what has been said, there is a difference between Anti-social Personality Disorder and Criminality. The difference is that the former is a psychological concept and the latter is a legal one. Eysenck also points out that "most individuals with Anti-social Personality Disorder are not criminals. Bear in mind that many studies have focussed on the factors responsible for criminality, which are only of partial relevance". (Eysenck, Michael W. 2004). Biological Theory of Criminality It is said that genetic factors play a role in the development of criminality, and probably the anti-social personality, according to Eysenck. Von Knorring et al. (1982) looked at criminal behaviour in men adopted as children. He found that when neither adoptive parents nor biological parents had any previous criminal convictions, only 3% of the men became criminals. ...read more.

Psychology, no matter in which area it is being studied, is a very useful tool to use in life. It can give an impression on why humans act the way they do. Correlations in human behaviour can be dated back to the primitive age as it is argued that some types of behaviour stems from the animal instincts that was once humans. However, there are no right or wrong answers in psychology as everyone is different, and everyone acts differently in different given situations. Theories are just that, theories. What theories such as criminal behaviour can do though is help social institutions such as Government make policy on education and health so that changes can be made to try and reduce crime and poor health and poverty. What it can't do is change the world but it can try and help change a person. It is obvious, with studies such as Sheldon's Body Types, that vanity played a very important role in society of the day. To look different would mean to be 'weary'. Just because someone is over-weight doesn't mean the pie cupboard must be padlocked. There are diseases in the world that make people over-weight such as an under active thyroid, sugar imbalances, but this does not make that person a criminal. Many psychologists had many ideas back in the day. However, norms and values were different at the times many experiments and research took place, so it could be argued that research is bias due to the prudish norms and values of the day. It could also be said that psychology during the first half of the 19th century was relatively new and that research then was not as strong as the more modern experiments conducted by psychologists such as Zimbardo and Crowe. It is obvious that there can never be one single causal factor in criminality, but past and future experiments can give a great understanding of crime and its effects in a general manner giving way to a number of factors such as biological, social and psychological respectively. ...read more.

Although the writer has included quite a lot of information into this piece of work it is confusing to read. It would have been much easier to read and understand if the writer had used their own words throughout.

The writer could, however, improve the score by making a plan first of all. There needs to be a clear introduction to the essay and then a clear discussion about the whole nature-v-nurture debate ie: is criminal behaviour down to our biology or is it affected by the environment.

The writer could then define clearly what social psychology is before citing studies regarding social influences and criminal behaviour.

The writer has made a much better attempt at introducing the biological argument.

The conclusion then needs to weigh up all this evidence citing the previous studies carried out and personal opinions should be avoided. This would improve the score.