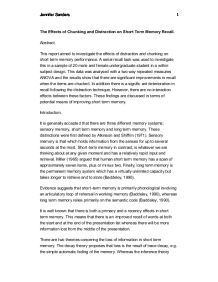 The Effects of Chunking and Distraction on Short Term Memory Recall

The Effects of Chunking and Distraction on Short Term Memory Recall. Abstract. This report aimed to investigate the effects of distraction and chunking on short term memory performance. A serial recall task was used to investigate this in a sample of 20 male and female undergraduate student in a within subject design. This data was analysed with a two way repeated measures ANOVA and the results show that there are significant improvements in recall when the items are chucked. In addition there is a significant deterioration in recall following the distraction technique. However, there are no interaction effects between these factors. These findings are discussed in terms of potential means of improving short term memory. Introduction. It is generally accepted that there are three different memory systems; sensory memory, short term memory and long term memory. These distinctions were first defined by Atkinson and Shiffrin (1971). Sensory memory is that which holds information from the senses for up to several seconds at the most. Short-term memory in contrast, is whatever we are thinking about at any given moment and has a relatively rapid input and retrieval. Miller (1965) argued that human short term memory has a span of approximately seven items, plus or minus two. ...read more.

Specifically he lacked the ability to transfer new short term memories into long term ones. He could repeat information for many minutes, but if distracted, even briefly, he would forgot. HM is not an isolated case and thus the role of the temporal lobes is clearly essential in human memory. This study therefore aims to assess the effects of the chunking of items and the presence of a distracter technique prior to recall on short term memory.It is hypothesised that chunked items without a distraction will facilitate greater recall than chunked items followed by a distraction. In addition it is hypothesised that chunked items without distraction will result in greater recall than non chunked items with a distraction. Overall, chunked items will be more successful in terms of recall then non chunked items and the presence of the distracter will result in a deterioration in recall. The null hypothesis, therefore infers that there will be no difference in recall between the conditions. Methodology. Participants were 20 male and female undergraduate students, aged between 18-19 years who participated voluntarily. The sample is highly female biased (15 female and 5 males were recruited). ...read more.

helping them to remember things on a day-day basis and that they should bear in mind that distractions are likely to cause memory loss. Individuals should also bear in mind the evidence which suggests that only between five to nine items can usually be held in short term memory. This study would have benefited from a larger sample size and a greater proportion of male participants in order to examine the possibility that there are gender effects. In addition it would be interesting to look at a wider demographic by including individuals from a broader age range. It would be interesting to expand this study in order to investigate the possibility that the type of distracter technique in particular, exerts an influence over recall. For example would these effects be replicated if the participant were required to read the distracter themselves rather than listening to it? Or to speak it aloud themselves? Greater attention should also be paid to strength of the distracter technique required to create these effects. It is hoped that future research will tackle these issues in order to increase our knowledge in this field and to continue to offer help for patients suffering from memory deficits. Word Count: 2087 ?? ?? ?? ?? 1 Jennifer Sanders ...read more.