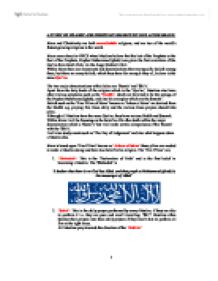 A Studyof Islamic and Christian Beliefs On Life After Death.

A STUDY OF ISLAMIC AND CHRISTIAN BELIEFS ON LIFE AFTER DEATH. Islam and Christianity are both monotheistic religions, and are two of the world's fastest growing religions in the world. Islam came about in 610CE when Muslims believe that the last of the Prophets or the Seal of the Prophets, Prophet Muhammed (pbuh) was given the first revelation of the Qur'an from God/ Allah, via the Angel Gabriel/ Jibril. Within Islam there are many sects and denominations that vary specific beliefs among them, but there are many beliefs, which they share for example they all, believe in the same Qur'an. The two major denominations within Islam are 'Sunnis' and 'Shi's'. Apart from the holy book of the religion which is the 'Qur'an', Muslims also have other various scriptures such as the 'Hadith', which are believed to be the sayings of the Prophet Muhammed (pbuh), and also his examples which are the Sunnah'. Beliefs such as the 'Five Pillars of Islam' known as 'Arkun ul Islam' are derived from the Hadith e.g. praying five times daily and the various times prayers should take place. Although all Muslims have the same Qur'an, they have various Hadith and Sunnah. Within Islam I will be focusing on the belief on life after death within the major denomination which is 'Sunni's' but I will make certain comparisons of the 'Sunnis' with the 'Shi's'. I will also study events such as 'The Day of Judgement' and also what happens when a Muslim dies. Islam is based upon 'Five Pillars' known as 'Arkun ul Islam' these pillars are needed to make a Muslim strong and have true belief in his religion. The 'Five Pillars' are; 1. 'Shahadah'- This is the 'Decleration of Faith' and is the first belief in becoming a Muslim. The 'Shahadah' is 'I declare that there is no God but Allah, and that prophet Muhammed (pbuh) is the messenger of Allah' 2. ...read more.

'Certainly (Paradise) is the supreme achievement! For this, let everyone work hard who wishes d work hard' (Qur'an 37:61) It is stated in the Qur'an, how we can choose what our ultimate fate will be according to our beliefs and actions; 'Is a person who knows that what was revealed to you in the truth from your Lord the same as the person who is blind to it? Only those who understand will remember. Those who fulfil the agreement of Allah and don't fail in their promise. They join together what Allah commands to be joined, hold their Lord in awe and fear the terrible accounting (of deeds). Those who have patience, seeking the gaze of Allah, who establish prayer, give in charity what we gave them both openly and secretly, and turn away evil with good. For these is the gaining of the (best) home' (Qur'an 13: 19-22) Although Muslims are told about Paradise in the Qur'an and the Hadith, and are given explanations of its wonders, Muslims still keep in mind that they cannot imagine Paradise, as the descriptions given within the Qur'an and Hadith are just examples or 'Mithal' of how Paradise will be. This means that humans do not have the power to imagine such a beautiful place beyond this earth. The Mithal given in the Qur'an and Hadith are just metaphors to help us understand how perfect Jannah will be. It is mentioned in the 'Hadith Qudsi'; I have prepared for my righteous servants what no eye has ever seen nor ear heard nor any human being ever conceived of' (Bukhari and Muslim) The opposite of Heaven is Hell or 'Jahannam', a place of punishment for those who failed to recognise the right path. There are many evil deeds that go on in the world such as murders and rapes. Muslims believe that people who committed such sins will be punished in Hell because of their actions. ...read more.

They believe that in Purgatory people will b e punished for a while for their sins, in order to be purely cleansed of their 'accumulated imperfections' and 'venial sins' to get into Heaven. Catholics believe that the inhabitants of Hell will be constantly tortured with fire. However, if the person's family and friends offer masses and prayers for them then their time in Purgatory will be lessened. Catholics believe that Hell is a place where all the wrongdoers will be continuously and sufficiently punished without any hope of relief, as they will remain there for eternity. They also believe that the devil. Satan, will also be punished within Hell for eternity. The level of torture I Hell will be 'meted' out in accordance to the person's sins and how serious they were. There will be no prospect of mercy within Hell, as the inhabitants of it will remain there for eternity. Within Hell all people will be completely isolated from God, and the body will be caused unbearable pain by some supernatural form of power. Catholics also believe in a place called Limbo. Limbo is a place, which is for babies who die before being baptized. They believe the Limbo is separate from Heaven, but it is a place where all the infants and young are happy. Christians believe that Jesus will return to the earth in the 'Second Coming', and this is when he will conduct the Final Judgement. Christians believe that those people who have died will continue in their punishment and those who are in Heaven and Hell will continue to spend eternity there. But they believe that those in Purgatory will immediately go to Heaven at the coming of Jesus, and that dead bodies will be resurrected. They believe that all the people alive on the earth will be assembled together; 'Those who have rejected the Lord in this life, who have sinned mortally. Who have no remorse for sin and do not seek forgiveness will have condemned themselves to Hell for all eternity.' (Matthews 25: 31-32) 1 ...read more.