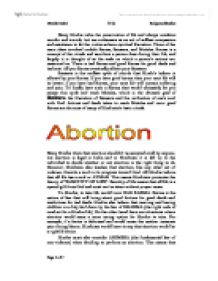 Many Hindus value the preservation of life and always condemn murder and suicide, but see euthanasia as an act of selfless compassion and assistance to let the victim achieve spiritual liberation. Three of the main ideas involved include Karma, Samsara, and Moksha. Karma is a concept of the rituals and sacrifices a person does during their life, and largely it is thought of as the scale on which a person's actions are measured on. There is bad Karma and good Karma for good deeds and bad acts. All you Karma eventually affects your Samsara. Samsara is the endless cycle of rebirth that Hindu's believe is affected by your Karma. If you have good karma then your next life will be better, if you have bad Karma, your next life will contain suffering and pain. To finally have such a Karma that would ultimately let you escape this cycle and reach Moksha, which is the ultimate goal of Hinduism. Moksha is the liberation of Samsara and the unification of one's soul with God. Actions and deeds taken to reach Moksha and incur good Karma are the aims of many of Hinduism's basic rituals. Many Hindus think that abortion shouldn't be accepted at all by anyone, but abortion is legal in India and in Hinduism it is left up to the individual to decide whether or not abortion is the right thing to do. ...read more.

In Hinduism the main goal is that of Moksha or liberation. Liberation is only achieved by way of Samsara. To go through the many cycles of Samsara, an individual must die. To be released of the pain and burden of a disease caused by age or illness by way of euthanasia is considered liberating the person and helping them continue Samsara and inevitably reaching Moksha. The use of euthanasia is condoned as long as the suffering individual wants to die based on self-will. Modern Hinduism condones the practice of euthanasia based on religious beliefs. The use of euthanasia actually assists people in achieving the main goals of their religion. Euthanasia being an issue that Hindus have had somewhat of an alternative view on, they have supported their views with the fact that euthanasia has actually been a helpful aspect of their religion and in furthering their religious quest. In Hinduism, a miserable and painful life is directly linked to the result of bad karma in a previous life or past lives. This does not necessarily mean that suffering is due to bad karma but it may also be a way of "working off bad karma" in a certain sense. This is where EUTHANASIA comes in; to interfere with this way of working off bad Karma is not advisable in Hinduism. The actual subject of euthanasia is quite complex when you look at it from a Hindus standpoint, however most Hindus would be against it. ...read more.

Prayopavesa, or fasting to death, is an acceptable way for a Hindu to end their life in certain circumstances. Prayopavesa is very different from what most people mean by suicide: * It's non-violent and uses natural means; * It's only used when it's the right time for this life to end - when this body has served its purpose and become a burden; * Unlike the suddenness of suicide, prayopavesa is a gradual process, giving ample time for the patient to prepare himself and those around him for his death; * While suicide is often associated with feelings of frustration, depression, or anger, prayopavesa is associated with feelings of serenity Prayopavesa is only for people who are fulfilled, who have no desire or ambition left, and no responsibilities remaining in this life. It is really only suitable for elderly ascetics. Hindu law lays down conditions for prayopavesa: * inability to perform normal bodily purification * death appears imminent or the condition is so bad that life's pleasures are nil * the decision is publicly declared * the action must be done under community regulation An example of prayopavesa: Satguru Sivaya Subramuniyaswami, a Hindu leader born in California, took his own life by prayopavesa in November 2001. After finding that he had untreatable intestinal cancer the Satguru meditated for several days and then announced that he would accept pain-killing treatment only and would undertake prayopavesa - taking water, but no food. He died on the 32nd day of his self-imposed fast. Manish Dubal 10 Q Religious Studies Page 1 of 7 ...read more.