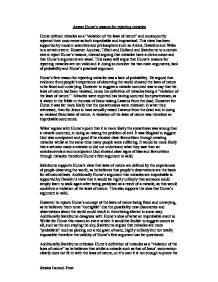 Assess Hume's reasons for rejecting miracles Hume defined miracles as a "violation of the laws of nature" and consequently rejected their occurrence as both improbable and impractical. This view has been supported by modern scientists and philosophers such as Atkins, Dawkins and Wiles to a certain extent. However Aquinas, Tillich and Holland and Swinburne to a certain extent reject Hume's reasons, instead arguing that miracles have a divine cause and that Hume's arguments are weak. This essay will argue that Hume's reasons for rejecting miracles are not valid and in doing so consider his two main arguments; lack of probability and Hume's practical argument. Hume's first reason for rejecting miracles was a lack of probability. He argued that evidence from people's experience of observing the world showed the laws of nature to be fixed and unvarying. However to suggest a miracle occurred was to say that the laws of nature had been violated, hence his definition of miracles being a "violation of the laws of nature." Miracles were reported has having occurred by eyewitnesses, as is stated in the Bible in the case of Jesus raising Lazarus from the dead. However for Hume it was far more likely that the eyewitnesses were mistaken in what they witnessed, than for Jesus to have actually raised Lazarus from the dead and in doing so violated fixed laws of nature. ...read more.

that of Jesus' resurrection clearly does not fit in with the laws of nature, on it's own it is not enough to prove the laws of nature have been violated, a view supported by Aquinas who suggests miracles have a divine origin. The contingency argument, supported by Holland and Tillich also criticises Hume's definition of miracles as a "violation of the laws of nature." It uses evidence from the Bible, such as Jesus feeding the five thousand, to highlight that God's aim with miracles is not to fit in with the framework of modern concepts but to for God to reveal Himself to the people. Tillich himself argues that miracles do not have to involve the violation of nature as they can be possible events, such as a train stopping just in front of a child on a crossing, which hold religious significance for some people. Therefore a miracle does not have to be an improbable event, suggesting that Hume's argument is not significant. Hume's second reason for rejecting miracles is presented in his practical argument. He considered levels of education to be a significant factor as miracles were only reported to have occurred by those who were not educated enough to understand the scientific explanation of an event. ...read more.

It is unclear at what stage a person becomes "educated" sufficiently to reject miracles. It is also unfair to assume that a person believes in miracles simply because they do not know any better, as it is possible to both have a strong belief in God and a good understanding of Science. Further to this it is unclear what constitutes being "ignorant and barbarous" as whilst earlier nations may now seem uneducated compared to modern times, the nation may have been highly educated for the time as the standards change. Therefore the relevance of Hume's second argument can be questioned. In conclusion Hume believes that miracles are "violations of the laws of nature" which are fixed and unvarying, and that they are only experienced by uneducated people who do not understand Science. This view rejected by Aquinas, Swinburne Holland and Tillich. Swinburne believes the laws of nature to be "corrigible" whilst Holland and Tillich argue that miracles are not violations of the laws of nature but sign events revealing God to the people. However Dawkins and Atkins support Hume's view that miracles are only experienced by the uneducated. Overall Hume's reasons for rejecting miracles are valid to only a minimal extent, as he does not consider the different definitions of a miracle, and does not define what constitutes ignorant and barbarous. Jessica Lancod-Frost ...read more.