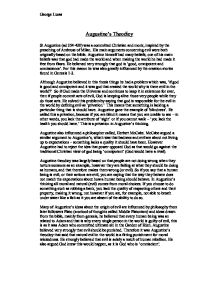 Augustine's Theodicy St Augustine (ad 354-430) was a committed Christian and monk, inspired by the preaching of Ambrose of Milan. His main arguments concerning evil were both originally based on the bible. Augustine himself had many beliefs, one of his main beliefs was that god had made the world and when making the world he had made it free from flaws. He believed very strongly that god is 'good, omnipotent and omniscience'. For this reason he was also greatly influenced by the creation stories found in Genesis 1-3. Although Augustine believed in this thesis things he had a problem which was, 'if god is good and omnipotent and it was god that created the world why is there evil in the world?' ...read more.

This is a privation in Augustine's thinking. Augustine also influenced a philosopher called, Herbert McCabe. McCabe argued a similar argument to Augustine's, which was that badness and evil are about not living up to expectations - something lacks a quality it should have been. However Augustine had to reject the idea that power opposed God as that would go against the traditional Christian view of god being 'omnipotent' (God would have a rival). Augustine theodicy was largely based on that people are not doing wrong when they torture someone as an example, however they are failing at what they should be doing as humans, and that therefore makes them wrong (or evil). So if you say that a human being is evil, or their actions are evil, you are saying that the way they behave does not match the expectations about how a human being should behave. ...read more.

Many of Augustine's ideas about the origin of evil are influenced by philosophy from later followers Plato (a school of thoughts called Middle Platonism) and ideas drawn from the bible, mainly from genesis, he believed that every human being was an related to Adam and that is why every single person in the world is guilty of evil, this is as it was Adam who committed ultimate sin in the Garden of Eden. Augustine believed very strongly that evil should be punished. Therefore it was Augustine's theodicy that said that natural evil in the world is a fitting punishment for moral wickedness. He strongly believed that evil is solely a result of human rebellion. He also argued God knew this would happen, as it is God who is 'omniscient'. ?? ?? ?? ?? George Lucas ...read more.