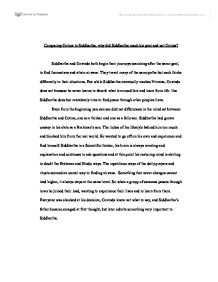 Comparing Gotma to Siddhartha, why did Siddhartha reach his goal and not Gotma?

Comparing Gotma to Siddhartha, why did Siddhartha reach his goal and not Gotma? Siddhartha and Govinda both begin their journeys searching after the same goal, to find themselves and attain nirvana. They travel many of the same paths but each thinks differently in their situations. But while Siddhartha eventually reaches Nirvana, Govinda does not because he never learns to absorb what is around him and learn from life like Siddhartha does but mistakenly tries to find peace through other peoples lives. Even from the beginning you can see distinct differences in the mind set between Siddhartha and Gotma, one as a thinker and one as a follower. Siddhartha had grown uneasy in his state as a Brahman's son. The riches of his lifestyle babied him too much and blocked him from the real world. He wanted to go off on his own and experience and find himself. Siddhartha is a Scientific thinker, his brain is always wanting and explanation and continues to ask questions and at this point his maturing mind is starting to doubt the Brahman and Hindu ways. The repetitious ways of the daily prayers and rituals seemed an unreal way to finding nirvana. Something that never changes cannot lead higher, it always stays at the same level. So when a group of samanas passes through town he joined their lead, wanting to experience their lives and to learn from them. ...read more.

Even the Buddha himself knows this; he is just trying to help the masses that are not as clever as Siddhartha. Siddhartha now sees that experience is the only way to gain knowledge and goes out into the world to try it all. For many years of his life after he tries many new lives. From Kamala, a young courtesan, he learns about Physical love. He learns to become a merchant and indulge in the pleasures of a wealthy life. He lived on many years like this and grows old and worn but finds it is all a false happiness. After everything he obtained he is still discontent. The women, clothes, wine; all do nothing for the mind. He abandons it all and runs away into the forest and falls asleep beside the river, wishing to die. Here he meets Govinda again for the first time since he had joined the Buddha. And Siddhartha saw that Govinda had not changed. Govinda was still blindly following in Buddha's steps, doing the rituals and living under his ways. Vasuedeva the ferryman is very important to developing Siddhartha. He never tries to teach Siddhartha but hints at where to look. Vasudeva says that it seems as though the river has spoken to him and suggests that he stay with him beside the water. It is through Vasudeva that he realizes the symbolism of the river to life. ...read more.

Nirvana cannot be reached only through writings and other teachings. These things can lead you down the path but it can bring you only so far because it is all feelings and discoveries that others have achieved through their own life. Writings can only convey part of the message because you cannot produce in words your experience and have another understand every aspect of the way you felt. That is how your mind dealt and reacted to that situation. Can you tell someone exactly how good jamoca almond fudge ice cream is? They can tell you how it tasted to them, but can they interpret the exact sense it will have on your tongue? Can you truly understand how much you would like it unless you have tasted some yourself? Some may think it's too strong, some may not like almonds, some might like vanilla better, and everyone will have their own opinion and slight difference. Life is the same way. Govinda never reached his goal because his whole life he was searching in others lives. First he followed Siddhartha with the Samanas then leaves the samanas by his own choice, only to follow another. And in the end he comes back to Siddhartha with one last desperate plea to try and understand. He never learned anything about himself because he was blinded by the belief that someone else could show him how. Everyone must decide for himself or herself what they do with their life, for following only leads you down another minds path away from your own awakening. ...read more.