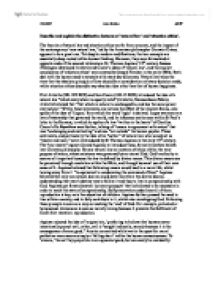 Describe and explain the distinctive features of 'natural law' and 'situation ethics'.

Describe and explain the distinctive features of 'natural law' and 'situation ethics'. The theories of natural law and situation ethics are far from concrete, and the impact of the contemporary 'new natural law,' led by the American philosopher Germain Grisez, appears to be a great one. Yet despite modern modifications, the two concepts are essentially deep-routed within human thinking. However, they were formulated at opposite ends of the second millennium: St. Thomas Aquinas' 13th century Summa Theologica developed Aristotle and Cicero's ideas of 'natural law', and the explicit conclusions of 'situation ethics' were created by Joseph Fletcher in the early 1960s. Both deal with the human need to astutely with every day dilemmas. Natural law takes the view that the absolute principle of love should be a consideration of every decision made, whilst situation ethics discredits any absolute idea other than that of human happiness. First Aristotle (384-322 BCE) and then Cicero (106-43 BCE) introduced the idea of a natural law "which everywhere is equally valid" (Aristotle, Nicomachean Ethics). Aristotle believed that "that which is natural is unchangeable, and has the same power everywhere." ...read more.

Following these precepts is seen as a way as reaching the 'end' of God. For example, protected or homosexual intercourse is seen as morally wrong because it prevents the fulfilment of God's first intention: reproduction. Aquinas rejected the idea of 'original sin,' preferring to believe that humans never intentionally pursuit evil; rather, evil is "sought indirectly, namely because it is the consequence of some good." Any sin committed whilst not in the quest for moral perfection were seen as simply a 'falling short' within the human consciousness. To 'sinners,' the act they perpetrate is an apparent good, but can easily be avoided by looking beyond 'unnatural' desires and into one's 'natural' conscience in order to find the right thing to do. Aquinas acknowledges that this can be a difficult task, and asserts that if people do not take care to look into the ideas of right and wrong, habitual immorality can develop. He stressed that this immortality is present in both the intention and carrying out of an act, and that to act in a good way for the wrong reason is to perform a good exterior act but a bad interior one. ...read more.

Situation ethics is an moral belief-system placed between these two extremes; it approaches moral dilemmas with the principles of the person's particular tradition. However, the 'situationist' is prepared to compromise these principles if love would be better served by doing so; he "follows a moral law or violates it according to love's need." Fletcher believed all situationists should enter moral decisions with the backbone principles of pragmatism, relativism, positivism and personalism. Situationists' pragmatism should ensure that the action taken works towards the end result of love; they should "relativize the absolute"; they should see that God is love, and thus follow the ethics with positivism; and they should put people first: personalism. These 'backbone' principles lead onto six main ones. First, that "only one thing is intrinsically good; namely love," secondly that "The ruling norm of Christian decision is love," thirdly that "Love and Justice are the same," fourthly that "love wills the neighbour's good," fifthly that "Only the end justifies the means," and sixth, "Love's decisions are made situationally, not prescriptively." These principles break away from traditional Christian beliefs as they see all actions as neither intrinsically 'good' nor intrinsically 'bad.' The moral correctness or any act "depends on whether love is fully served." 3/2/2005 Luke Bullen MLW ...read more.