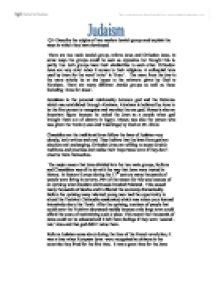 Describe the origins of two modern Jewish groups and explain the ways in which they have developed.

Q1- Describe the origins of two modern Jewish groups and explain the ways in which they have developed. There are two main Jewish group, reform Jews and Orthodox Jews. In some ways the groups could be seen as opposites but thought this is partly true both groups have their similarities to each other. Orthodox Jews are very strict when it comes to their religions. A colloquial term used by Jews for the word 'strict' is 'frum'. The more frum the Jew is the more strictly he or she keeps to the mitzvots given by God to Abraham. There are many different Jewish groups as well as these including 'Jews for Jesus'. Jewdaism is the personal relationship between god and the Hebrews which was established through Abraham. Abraham is believed by Jews to be the first person to recognise and worship the one god. Moses is also an important figure because he united the Jews as a people when god brought them out of slavery in Egypt. Moses was also the person who was given the Torah (Laws and Teachings) by God on Mt. Sinai. Chassidics are the traditional Jews follow the laws of Judaism very closely, both written and oral. ...read more.

Between 1810 and 1820 three cities in Germany; Seesen, Hamburg and Berlin made some dramatic changes such as mixed seating in the Synagogue. Many rabbis of reform movements took a 'rejectionist' view on some traditional rituals. For example: * Circumcision was seen to be barbaric and not practiced * The Hebrew language in the liturgy was replaced with German * The hope for restoration of the Jews in Israel was officially renounced. * Bar Mitzvah was replaced with a 'confirmation ceremony' * The laws of Kashrut and family purity were officially declared 'repugnant'. * Shabbat was observed on Sunday * Traditional resurrections on Shabbat behaviour were not followed. Orthodox Jews don't believe in the above changes and see it as compromising. The don't see reform Jews to be 'Real Jews', infact many don't see them as Jews at all. Q2- Describe the worship and lifestyle of these and explain how this reflects and assists beliefs. Because Chassidic Jews along with all Orthodox Jewish groups see the Torah as being divinely inspired and sacred they follow every word while Reform Jews see it as guidance from god that can be interpreted. Orthodox Jews have very long synagogue services each Sabbath lasting up to _________hours. ...read more.

Chassidic Jews go to a lot of effort to keep to the commandments and mitzvots and think it is unfair that Reform Jews still call themselves Jews when the don't put half as much effort or commitment in. Reform Jews don't see the changes they have made as a compromise, they see it as modernisation. They believe as the people change the religion should change to fit. They interpret things differently. For example, not working on Shabbat, they see this to have it's literal meaning, not going off and doing your job. Orthodox Jews see work to be the 30 jobs it took to build up the temple in which they worshipped thousands of years ago before they found there promised lands. This means they don't create fire or anything that could be associated with fire like electricity and many other things. Since the Reform Jews have split from the Orthodox hundreds of years ago they have grown apart and now have their own ways o doing things. If there was wars between the two groups over there differences then obviously there needs to be a change but Judaism is the worlds oldest religion and thy have got along fine for thousands of years. I think if Jews are happy with having separate groups then it is their decision and they should be able to stay this way. C ...read more.