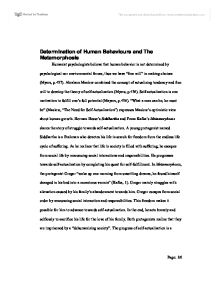 Determination of Human Behaviours and The Metamorphosis

Determination of Human Behaviours and The Metamorphosis Humanist psychologists believe that human behavior is not determined by psychological nor environmental forces, thus we have "free will" in making choices (Myers, p.437). Abraham Maslow combined the concept of actualizing tendency and free will to develop the theory of self-actualization (Myers, p.436). Self-actualization is one motivation to fulfill one's full potential (Mayers, p.436). "What a man can be, he must be" (Maslow, "The Need for Self Actualization") expresses Maslow's optimistic view about human growth. Herman Hesse's Siddhartha and Franz Kafka's Metamorphosis shares the story of struggle towards self-actualization. A young protagonist named Siddhartha is a Brahman who devotes his life in search for freedom from the endless life cycle of suffering. As he realizes that life in society is filled with suffering, he escapes from social life by renouncing social interactions and responsibilities. He progresses towards self-actualization by completing his quest for self-fulfillment. In Metamorphosis, the protagonist Gregor "woke up one morning from unsettling dreams, he found himself changed in his bed into a monstrous vermin" (Kafka, 1). Gregor mainly struggles with alienation caused by his family's abandonment towards him. ...read more.

As a father, Siddhartha feels responsible for his son who is without a mother. Knowing that his child brings suffering and that Siddhartha cannot provide him happiness, "guilt" and "love" restrains Siddhartha from abandoning his child. He realizes that his child repeats his abundance towards his own father, and he calls this experience Samsara. Understanding with appreciation that everyone has to experience life in his or her own direction, he is capable of renouncing responsibility of his child (ClassNotes on Siddhartha, "The Son"). Without social contact and responsibilities, Siddhartha's sufferings are ceased and Siddhartha is free to walk the path to self-actualization. When Siddhartha finally complete his life long quest towards self-fulfillment, which is mainly the lack of wisdom and happiness, he attains self-actualization. This internal satisfaction changes his external postures. His "glance and his hand, his skin and his hair, all radiate a purity, peace, serenity, gentleness and saintless" (120). He is at the state of Nirvana; this results from final cessation of all desires and sufferings. The major difference between the two works regarding renunciation of social interaction is that Siddhartha renounces social interactions willingly but in Metamorphosis, it is uncontrollable and undesirable. ...read more.

rather than Siddhartha's realization of changes in himself (selfishness). Gergor's humanity is restored by his sister's music. "Was he an animal, that music could move him so?" (49). In fact, Gregor is more human than any member of his family (ClassNotes on Metamorphosis, "Chapter 3 Analysis"). The music fills him with "deep emotion" that expresses his love for the family and leaves his room to tell his sister how much he appreciates her music. This action is the turning point where Gregor achieves self-actualization. He gains freedom due to renouncements of social interaction and responsibility to escape from the "imprisonment" (27), symbolized as his locked room. After the family admits their wish for his disappearance, he thinks "back on his family with deep emotion and love" (54). He decides that "he would have to disappear" (Kafka, 54) in order to restore the happiness of his family. Gregor's will to totally sacrifice for love of his family is a sign of being self-actualized and death is his way of sacrificing. Both protagonists in Metamorphosis and Siddhartha progress towards self-actualization by escaping from imprisonment by the dehumanizing society. This freedom is gained by renouncing social interactions and responsibility. Siddhartha achieves self-actualization by self-fulfillment; however, for Gregor it is achieved by self-sacrifice. ?? ?? ?? ?? Page: 1/6 Page: 3/6 Page: 4/6 Page: 5/6 Page: 6/6 ...read more.