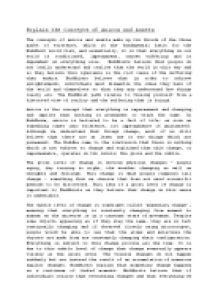 Explain the Concepts of Anicca and Anatta

﻿Explain the Concepts of Anicca and Anatta The concepts of anicca and anatta make up two thirds of the three marks of existence, which is the fundamental basis for the Buddhist world view, and essentially, it is that everything in our world is conditioned, impermanent, causes suffering and is dependent on everything else. Buddhists believe that people do not really understand and realise that the world is this way and so they believe this ignorance is the root cause of the suffering they endure. Buddhists believe that in order to achieve enlightenment, individuals must dismantle the ideas they have of the world and themselves so that they may understand how things really are. The Buddhist path relates to freeing yourself from a distorted view of reality and the suffering that it brings. Anicca is the concept that everything is impermanent and changing and implies that nothing is permanent or stays the same. In Buddhism, anicca is believed to be a fact of life; as soon as something comes into existence, its impermanence is guaranteed. ...read more.

Everything is subject to this change process all the time. It is due to this subtle level of change that change eventually appears visibly at the gross level. The visible changes do not happen suddenly but are instead the result of an accumulation of numerous smaller changes. Buddhists explain that momentary change happens as a continuum of linked moments. Buddhists believe that if individuals realise that everything changes and that everything we experience will eventually come to a natural end, that it will prevent them from hanging onto things and will eventually make things easier when these things happen ? accepting that change is a natural part of life will make us happier. The second mark of existence is Anatta, and Anatta is a concept which is unique to Buddhism and it is developed from the idea of radical impermanence, the fundamental idea of which indicates that nothing has an unchanging essence or ?self?. Everything is made up of lots of constantly changing parts and everything is a process. ...read more.

Nagasena uses the chariot story to explain the concept of anatta. He asks what a chariot is; is it the pole, the axle, the wheels or the reins? The answer is obviously that it is none of these things and is instead a combination of all of them. The Buddha is believed to have said that everything that is perceived by the senses are not really ?I? or ?mine? and therefore people should not cling to them and therefore it is the individual thought that oneself is ?I?, that creates ignorance. It is believed that once a person stops identifying self, they can free themselves from ignorance. This idea relates to the Skandhas which are the five aspects that establish a human being, the Buddha said that identifying any of the Skandhas as ?self? resulted in dukkha (the final mark of existence). These Skandhas are; Form ? the physical world and the material body, Sensation ? individual?s abilities to sense feelings and events, Perception ? how things are seen and reacted to, Mental Formations ? thought processes and Consciousness ? mental awareness. ...read more.